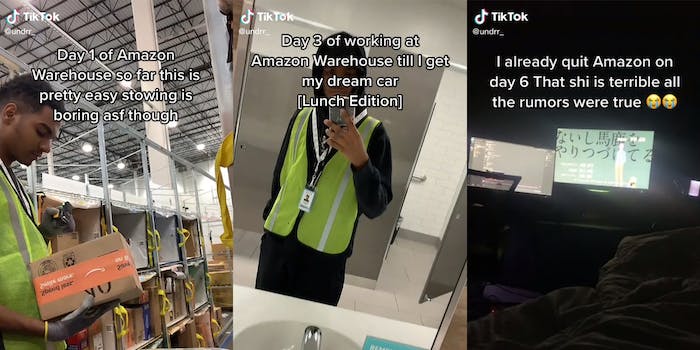 ‘The rumors were true’: Man claims he quit Amazon after 6 days, sparking debate

Amazon has frequently come under fire for its labor practices.

A study from earlier in the year found that “Amazon warehouse workers suffer serious injuries at twice the rate of rivals,” per CNBC. In 2018, journalist James Bloodworth claimed that employees would urinate in bottles to save time, according to the Verge. When a U.S. lawmaker repeated this claim, Amazon first denied it, only to walk back their denial a short time later.

This is not to mention the Illinois warehouse collapse that killed six Amazon workers last year. Employees working at this facility allege that they attempted to leave once they learned of the severity of the tornado, only to have their job threatened by Amazon management.

Elements like these have made working at Amazon notorious in the minds of some. Seemingly backing up this idea is a recent viral TikTok from user Eddy (@undrr_).

At first, Eddy used his TikTok page to post several videos claiming to show his time at Amazon. In these videos, he claims he was working at Amazon to afford his “dream car.”

However, the series was short-lived. After just six days, he posted the following update.

“I already quit Amazon on day 6,” he wrote in the text overlay of the video. “That shi is terrible all the rumors were true.”

In the caption, he added, “L Job dont recommend for anyone.”

At first, some users claimed he was being too dramatic.

“Bro can’t do a simple task,” one user wrote.

“Man if yall think is amazon is hard life’s wake up call is coming lmao,” another shared.

However, other alleged current and former Amazon workers were quick to take the opposing position.

“Don’t listen to anyone saying it’s easy,” one user wrote. “At least you actually worked there and can say you know it’s terrible with experience.”

“I worked there for 3 months… that was 89 days too much,” a second TikToker claimed.

“I tried it for my first job,” a further user recalled. “Terrible idea, I lasted a week.”

“I quit my first break gang,” an additional commenter alleged. “They called and said break over I said I’m over this job.”

Eddy responded to this comment, writing, “Bro I that’s how I felt every time my break would end.”

In other comments, Eddy noted that it was not only the work but the isolation of the job that became difficult to bear.

“Everyone is different,” he explained. “Im not stay in your corner and work kind of person, I need social interaction hence why I worked in a restaurant for a year.” He also claimed in a later comment that, while working alone, he was not allowed to listen to music.

“Dude the only good thing you’ll hear is the money,” Eddy concluded in a comment, “but it’s not worth it.”

We’ve reached out to Eddy via TikTok comment and Amazon via email.