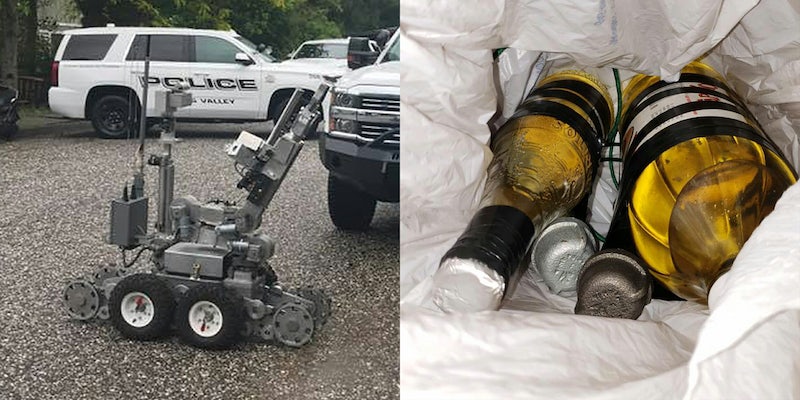 No, it wasn't a false flag operation.

A woman in a small town was arrested this week after an anonymous tip led local police to a clutch of homemade pipe bombs. It’s a head-turning local news story, but there’s little reason why anyone outside of Grass Valley, California, would be interested in it.

In late April, an innocuous tweet by Comey was consumed by the vortex of delusion that created the QAnon conspiracy, which asserts that there’s a vast network of pedophiles and war criminals who are targeting President Donald Trump. Comey’s “five jobs I’ve had” tweet spat back out as a “hidden message” announcing there would be a false flag attack on the very small Grass Valley Charter School Foundation’s fundraising event on May 11 and in Grass Valley, which is near Sacramento.

That tweet was then picked up the QAnon guru @StormIsUponUs (who has since been suspended and reinstated by Twitter) and sent out to his 110,000 followers with the warning that “nothing better happen” at the Blue Marble Jubilee fundraising event.

Nothing did happen, other than a torrent of emails and calls from “concerned patriots” freaking parents out, forcing the cancellation of the event. Local police had quickly determined that there was no actual threat, but the damage had been done.

As foundation President Wendy Willoughby told the Daily Dot, “[W]e knew the theory itself was not targeting our event and in fact, it appeared that the QAnon [followers] somehow thought they were keeping us safe. But there was concern that the call-outs to the Anon communities to ‘protect the children’ could entice these people to show up to our event. Both of those scenarios quickly took us to a tipping point—there was no win for the festival under these circumstances.”

Even so, many QAnon believers took to social media crowing that their “vigilance” had “saved children’s lives,” which the event organizers made clear were never in danger in the first place.

Except then the pipe bomb lady got arrested and the whole thing started all over again.

Found this on the chan!
Shout out to! @StormIsUponUs
Saving Patriots from another false flag! pic.twitter.com/QvSrA0iWcg

Acting on an anonymous tip, Grass Valley police raided the home of Mary Dalton, a 53-year-old woman said to be in possession of a “destructive device.” Dalton apparently led police to a closet containing several devices comprised of an unidentified liquid in a plastic bottle, a fuse, and electronic detonators. Police claimed Dalton had no apparent target and didn’t reveal her motive for making the bombs. Dalton had been renting rooms to people in her house, so it’s also possible that she had nothing at all to do with making the devices—though Dalton also told police she found the bombs and put them in plastic bags, then put the bags in her closet.

These questions remain unanswered several days after the arrest, and Grass Valley police didn’t respond to a request for comment from the Daily Dot.

But the finding of explosive devices at a house a mile away from the Fairgrounds where the Blue Marble Jubilee was to be held (around the same time Comey deleted the tweet that started the whole mess) was all the coincidence that QAnon believers needed. They declared that they’d been right the whole time and that there had been an attack planned—one that their decoding and diligence stopped.

To be clear, nobody has connected these two events other than the conspiracy theorists who created the first one. Local police or the FBI haven’t announced any connection, and there’s no evidence Dalton has any link to the “deep state” or QAnon. Her arrest is just a local crime story.

In fact, it’s incredibly unlikely that the canceled event and the pipe bombs are linked.

For one, it’s not unusual for people to be arrested for making homemade explosives. Just in the first few months of 2019, people have been arrested for making homemade bombs in Washington, California,  Arizona, Florida, and Michigan. And these are just arrests that actually were reported on. Small towns like Grass Valley certainly aren’t immune from crime, and Grass Valley made the FBI’s top 20 list for the violent crime rate in California in 2011. There’s simply nothing out of the ordinary about what happened with Dalton.

Beyond that, the timeline doesn’t match up. The Blue Marble Jubilee was canceled on May 3, yet Dalton was arrested on May 18. Did she simply sit around with a closet full of pipe bombs for two weeks? If she had been tabbed by the deep state to bomb the event, why did she keep the bombs around after the event was no longer happening? Why did she lead police to them once she was discovered? Why did she even stay in town? The event wasn’t even taking place until May 11, so why make bombs and have them lying around for over a week, primed and ready to go off?

It also makes no logical sense that local law enforcement, which had already cleared the event, would then arrest someone for planning to bomb the event, thereby falsifying its own claims. And while QAnon believers are focused on the detail that Dalton’s house was a mile from the fundraiser site, this isn’t relevant either—unless she was planning to walk the whole way with a large sack of bombs and then have no plan for quickly getting herself out of the “bomb site.” If she had a car, the distance wouldn’t matter.

Finally, Comey’s eventual deletion of the tweet, over two weeks after the event was canceled, can easily be written off to him not wanting anyone else to retweet the crazy conspiracy theory that been concocted around it. It’s not like deleting a tweet makes it magically go away forever.

Lacking evidence, there’s nothing to link Dalton’s actual alleged crime with the fake alleged crime of attacking the Blue Marble Jubilee. As with most conspiracy theories, the damage from that will linger long after the movement has gone on to its next obsession—leaving a charter school out tens of thousands of dollars, thanks to the “concern” of people “protecting children.”