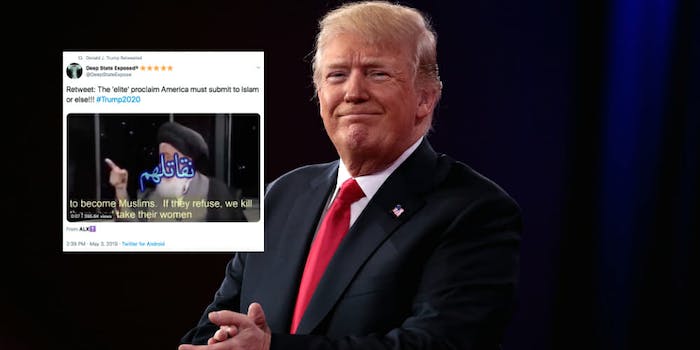 The account boasts that it has now been retweeted by the president nine times.

It is often seen as an endorsement when the President of the United States retweets just about any account online–which is why it matters that President Donald Trump just retweeted a major QAnon account to his 60 million followers on Saturday.

The conspiracy theory account is dubbed “Deep State Exposed.” The tweet includes an unverifiable captioned video regarding Islam, with the intended purpose of spreading Islamophobia. The video has now been viewed a whopping half-million times.

Retweet: The 'elite' proclaim America must submit to Islam or else!!! #Trump2020 pic.twitter.com/SK91xliCUQ

“Whoa a president retweeted this,” one person said in the comments. “Holy shit that’s astonishing. That the president would repeat this, I mean. Yikes. No sense of history whatsoever,” another said.

The account boasts that it has been retweeted by the president nine times now in its Twitter bio.

QAnon is pro-Trump conspiracy theory that started in 2017 on a 4chan account when someone began anonymously posting cryptic conspiracy theories regarding Trump and his political adversaries.

The person behind the account, who has come to be known as “Q,” has claimed to be a high-level government insider. There are now a plethora of QAnon conspiracy accounts that digitally push out conspiracy theories and extremist messages on different social media platforms.

QAnon started as a fringe, one-person endeavor, but has since swelled into a pro-Trump movement brought into the mainstream by Trump supporters. Now Trump is giving legitimacy to the baseless movement through his retweets.