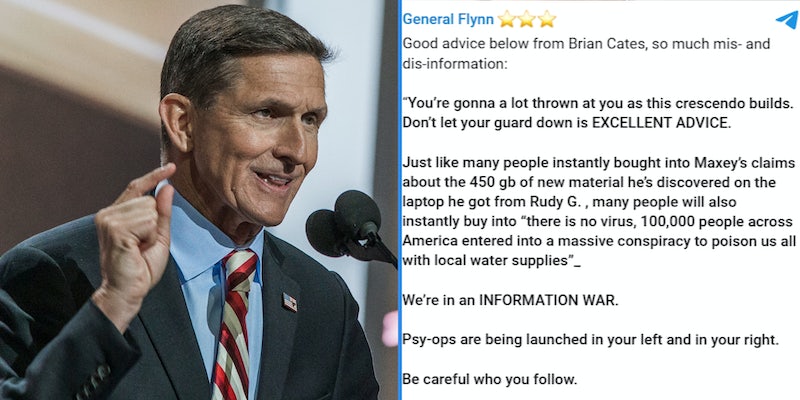 Devoid of leaders, Q influencers go their own way.

The episode signals another rift among the conspiracy theorists convinced the world is governed by a shadow group of Satanists who rape and eat children. With former President Donald Trump out of office, who they believed was fighting this cabal, and whoever played “Q” silent for over year, QAnon now lacks a definitive leader.

The void in leadership has created both opportunities and conflict. Attempts to attract followers’ attention appear to have sparked this latest conflict.

Political activist Jack Maxey recently claimed that he’d discovered an additional 450 gigabytes of deleted data on a copy of Hunter Biden’s laptop’s hard drive. Naturally, this caused a frenzy in QAnon world, which counts the laptop among its many obsessions.

Chiropractor Bryan Ardis also recently sparked a flurry of interest with a bizarre claim about COVID-19 he made in his video, Watch the Water. Ardis believes COVID is actually caused by king cobra venom being put in the water supply, vaccines, and treatments for the virus as part of a plot to turn people into “a hybrid of Satan.”

Both Maxey’s and Ardis’ claims have been repeated by influential QAnon followers.

Now a second contingent of QAnon influencers are telling people not to believe them.

On Tuesday, Brian Cates, a columnist with the far-right Epoch Times, posted a warning for people to be careful about the conspiracy theories they believe.

“Just like many people instantly bought into Maxey’s claims about the 450 gb of new material he’s discovered on the laptop he got from Rudy G., many people will also instantly buy into ‘there is no virus, 100,000 people across America entered into a massive conspiracy to poison us all with local water supplies,” he wrote on Telegram.

As Poker and Politics noted, Cates has been on an anti-Maxey crusade lately. “Brian Cates is having none of Jack Maxey’s nonsense,” it tweeted.

Cates also said they’re in an information war and psychological operations, or psyops, are everywhere. He further urged people to be cautious about who they follow and stop listening to “authority figures who appeal to your confirmation bias.”

“Don’t just instantly adopt some new claim some guy you never heard of two weeks ago presented to you,” he wrote. “The biggest danger MAGA has right now is that so many people have detached from reality they literally ready to believe anything. You actually need MORE discernment and skepticism right now, not LESS.”

“I totally agree with this,” Diaz commented in her own post. “Don’t fall for the newest ‘theory’ out there because you lose discernment and can’t find your true north.”

The rift between factions of QAnon’s quasi celebrities is causing infighting among their respective audiences, who are struggling to decide what to believe.

“His information checks out, you can look it all up yourself,” a subscriber of TheStormHasArrived17’s Telegram channel wrote of Ardis’ obviously false allegation that COVID is actually caused by king cobra venom.

“Do these people like Maxey work for the deep state to sabotage our efforts or just being duped by the deep state with fake info??” one of Cates’ subscribers opined.

Several said that they miss the good old days when they could simply follow along with the cryptic posts by whoever played Q.

“I think Q spoiled some people,” wrote one. “They got used to the drops and the constant flow of info, even if they didn’t understand it, that now that Q is pretty much gone they seek to fill the void with anyone who claims to have inside info.”

Others are getting tired of the drama. “Most channels these days are all at each other’s throats! Time to say bye,” one of Pedersen’s subscribers replied to his repost of Cates’ warning.

Some find it ironic that the same crowd who convinced people that John F. Kennedy Jr. is alive and that celebrities are addicted to a chemical harvested from children’s brains is now urging them to be careful about what they believe.

The Q Origins Project tweeted of Cates’ post, “He’s right! But GOLLY GEE, HOW MIGHT THAT HAVE HAPPENED, BRIAN??????”