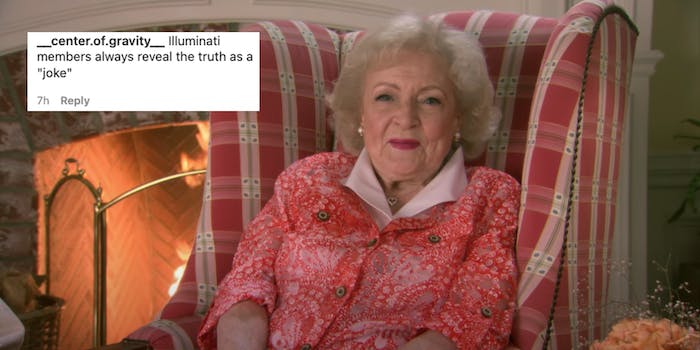 'Joke or not, you have to question ANYONE in Hollywood who makes 'jokes' about adrenechrome and child sacrifice.'

A years-old comedy sketch in which Betty White jokes about drinking “the blood of a virgin” has conspiracy theorists convinced that the deceased Hollywood icon was a member of the “Satanic elite.”

White, who passed away due to natural causes on Friday at the age of 99, made the remarks in a 2017 sketch on her TV mini-series “Betty’s Happy Hour.”

“People always ask me how I stay so youthful. I tell them ‘I eat well, get plenty of rest, and every third Sunday I drink the blood of a virgin,'” White jokes. “And these days they’re getting harder and harder to find.”

But in the wake of White’s passing, conspiracy theorists have been scrambling to uncover “proof” that the elderly woman’s death was somehow malicious.

Already, conspiracy theorists have alleged that the death was suspicious given that White died 17 days before her 100th birthday. Q is the 17th letter of the alphabet, a reference to the QAnon conspiracy theory. A fake quote that attempted to claim that White likely died after receiving a COVID-19 booster shot was also widely shared online.

Now, after a TikTok user shared White’s 2017 comedy sketch, conspiracy theorists believe they have finally gotten to the bottom of White’s passing. In countless remarks across social media, dozens of users have turned against the beloved comedian due to the satirical video.

Over on the conspiratorial message board Godlike Productions, references were made to the chemical compound “Adrenochrome,” which conspiracy theorists falsely believe is a psychedelic drug harvested from the brains of children that is regularly consumed by the world’s elite.

A copy of the video shared on Instagram was similarly flooded with comments accusing White of engaging in child sacrifice. Even those who admitted that the clip was clearly a joke suggested that White was merely using humor to hide her true involvement in drinking blood.

“Joke or not, you have to question ANYONE in Hollywood who makes ‘jokes’ about adrenechrome and child sacrifice,” one user said, despite White never mentioning either. “You gotta wonder how she stayed so youthful while remaining one of the biggest stars in Pedowood.”

Re-uploads of the video this week also gained tens of thousands of views on YouTube. One user in a widely upvoted comment accused White of being “wicked” and said the video was the latest reason why she refuses to donate blood.

“Sad how people are hyping her up! When she’s just wicked,” the commenter said. “The main reason I don’t do blood drives-would say it’s going to people in need but people lie… WAKE UP PEOPLE!! The world is wicked.”

Another commenter appeared shocked over the belief he had been “fooled” by the senior citizen.

“Dang, boy was I fooled. I thought she was one of the good ones,” the user said. “No one in their right mind would ever post such a montserous [sic] video. Not a joking matter. They throw it in our faces. Her deeds will follow her.”

One user even went as far as to celebrate White’s death due to their misrepresentation of the comedy bit.

“I almost cried when I find out she passed away,” the user wrote. “Now I’m so happy one 👿 less on this earth.”

Even the original YouTube video from 2017 that clearly denoted the clip as coming from White’s old comedy show was inundated with comments.

“She’s telling the truth, knowing that people don’t believe it,” one remarked.

White is just the latest high-profile celebrity to be accused of drinking blood and sacrificing children without evidence.