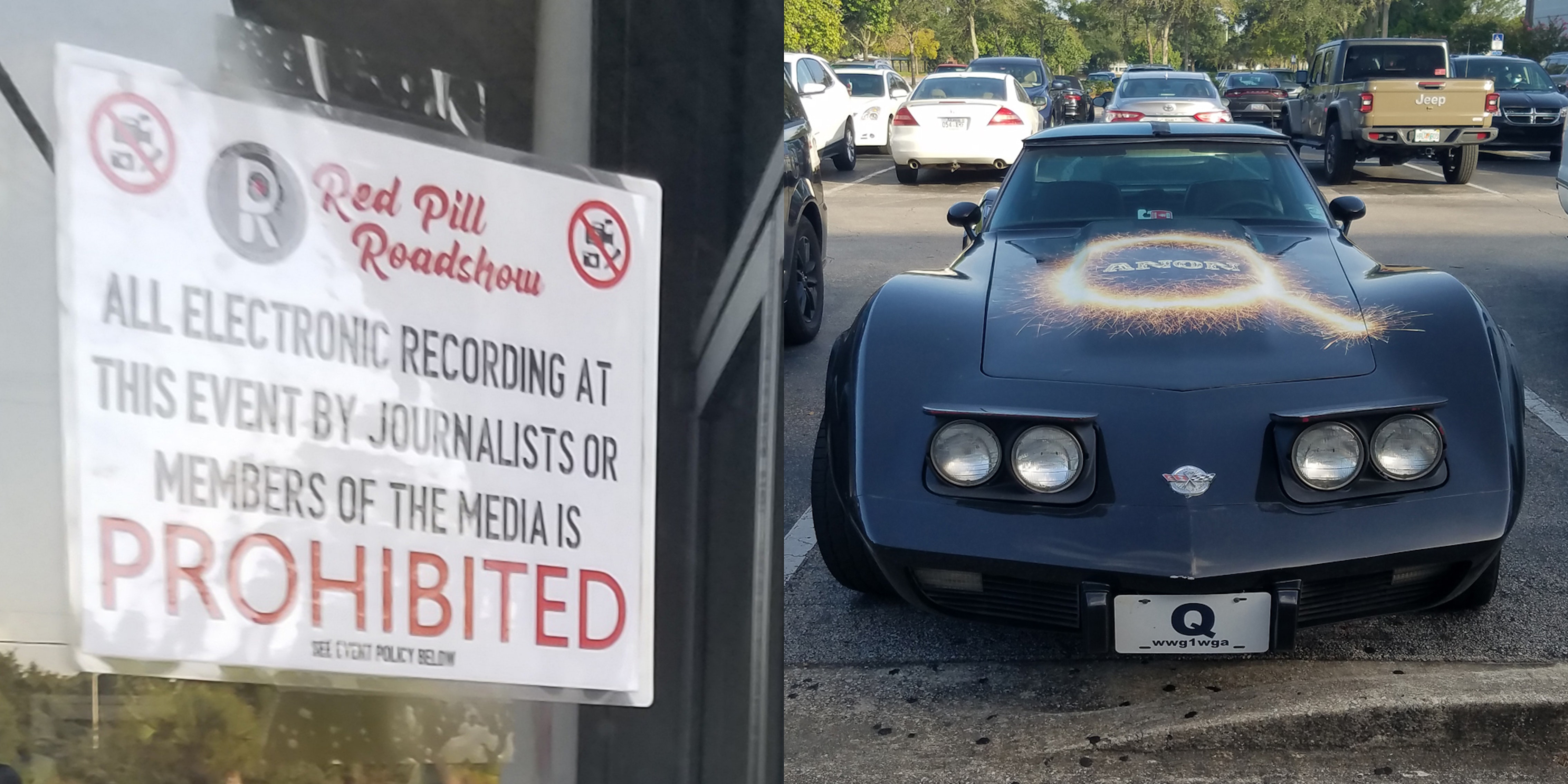 On the floor for the Red Pill Roadshow, a QAnon tent revival

In Jacksonville, a who's who of snake oil salesmen preached the gospel.

They drank. They danced. They talked about child sacrifices. And that was just the beginning.

On Aug. 25, some of the biggest names in QAnon attended the Red Pill Roadshow at the Jacksonville Ice & Sportsplex.

QAnon is a conspiracy theory that a satanist pedophile cabal controls the world. They believe President Donald Trump is at war with this cabal, sometimes called the Illuminati.

The Red Pill Roadshow was equal parts spectacle, lunacy, and convention—but mostly grift. There’s a growing grifter class of QAnon personalities. For their marks, the QAnon faithful, the show was a chance to mingle with other members of the quasi-religious conspiracy theory community. It was kind of sad to see them taken advantage of.

Originally planned when the Republican National Convention was to be held in Jacksonville, Florida, organizers soldiered on, undeterred, after the RNC moved online due to the coronavirus pandemic.

“We’re going to rock out and have your favorite social media influencers and citizen journalists on stage to celebrate President Donald Trump’s nomination and eventual defeat of the deep state!” the Red Pill Roadshow promised.

The event is named after the red pill that awakens Keanu Reeves’ character in The Matrix from the vegetative state most humans live in as heat-producing batteries for the machines that rule Earth. It’s become a popular meme in online, far-right circles as a way to radicalize against mainstream society.

For $25, Red Pill Roadshow attendees could delight in eight hours of QAnon programming. The lineup included former Trump campaign photographer Gene Ho, Joe Flynn (brother of Michael Flynn), Jeffrey Pedersen of In the Matrixxx, Kate Buckley of the Kate Awakening, and many more quasi-celebrities of QAnon.

The Daily Dot was there when they gathered at the facility that houses a public ice rink.

Some may have been disappointed to discover that, in lieu of QAnon on ice, which would’ve been a spectacle beyond words, attendees were herded onto a darkened basketball court. Immediately it was clear that this was no ordinary conference.

Camouflaged men in bulletproof vests manned the doors and periodically patrolled the perimeter. One had a large knife strapped to his back.

House music blared across hardwood in the shadowy space inside; even the stage was shrouded in darkness. Some selling books and merchandise by the bathrooms used cell phone lights to hawk their wares.

In the alternative, the flier suggested a neighborhood watch. Some may feel less safe by this idea. QAnon followers have committed violent crimes in its name and it’s been labeled a domestic terrorist threat by the FBI.

The speeches began at five—and, oh, what speeches they were. The theme of the Red Pill Roadshow can be distilled into the three Ps: President Trump, Pedophiles, Patriotism. Speakers hovered over these topics as faithfully as the over-80 crowd at the Golden Corral starch bar.

Those familiar with QAnon will be unsurprised that some of the evening’s messages didn’t make sense and others directly contradicted one another.

One man brayed that the First Amendment was under attack. Yet signs on the doors prohibited journalists from recording. (This was widely ignored.)

“It’s got nothing to do with ‘Trump is the savior,'” said speaker Joe Stroh (unironically known as QAnon Obiwan and Obiwan Qenobi).

Former Republican congressional candidate Christy McLaughlin was among several who preached the opposite. To hear them tell it, Trump should be president for life.

No one seemed to notice the disconnect or much care if they did. They came for fetid red meat and that’s what they got.

“I didn’t sign up to see women blown in half,” Stroh vowed, arguing that women shouldn’t serve in combat, which begs the question of who he would like to see blown in half.

McLaughlin declared that she was thrown out of law school for being a conservative. “Now I’m Florida International University’s worst nightmare,” she snarled, then suggested defunding colleges.

Conferences of any stripe attract the die-hards, and this was no exception. One woman brandished a giant Q flag like she was in the Macy’s Thanksgiving Day Parade. Another decked out in a glitter and butterfly wings proudly carried a sign that said “Child lives matter.”

Surprisingly, the crowd was mostly female and skewed more millennial than Boomer. Less surprising was that the 100 or so attendees were nearly entirely white. The speakers had a similar demographic. An exception was Joel Patrick a.k.a. the “legendary Black redneck,” an odd moniker as he sounded more wealthy suburb than rural Southern.

Lest you think he offered any diversity of thought, Patrick warned that Black Lives Matter wants to destroy America and likened it to the KKK. This went over extremely well.

Then he launched into an original song in the broken spirit of “Old Town Road.” So many country music cliches have rarely occurred in one verse.

Attendees seemed to really dig it. A few got up to dance.

Maybe it was the darkness—lord, was it dark in this place where we were to hopefully see the light—but as the night wore on, and on, and on, most people seemed, in a word, bored. The event progeny of last year’s Great Awakening was more snoozefest than rockin’ good time. Applause lines were few, laughs fewer.

It was a mercy when Stroh brought a Magic Q-Ball onstage. Inbred cousin to the Magic 8-Ball (and perhaps a patent violation), the Magic Q-Ball is billed as “the secret weapon to expose the cabal.”

“This contraption of mystical powers provides the Q answers to all of your questions. …[N]o swamp creature secrets are safe any longer.”

And if that’s not enough enticement to spend $32 on a Magic Q-Ball (Magic 8-Balls start at $12.95), it’s marketed with a picture of Hillary Clinton looking like the cursed spawn of Madame Cleo and the villain from Who Framed Roger Rabbit?

This segment at least solicited some enthusiasm. Finally we had something to do besides sit slack-jawed through 15-minute presentations about satanic rituals in abortion clinics, infant sacrifices, and violent leftists while our butts went numb.

After a few minutes of hyping the Magic Q-Ball’s “mystical powers,” Stroh solicited questions from the crowd. Here’s a few:

Question: Will the Hillary Clinton body count keep rising?
Answer: Is that the right question?

Question: Is JFK Jr. alive and going to be the vice president?
Answer: There are no coincidences.

The most amazing thing about this performance was that Stroh and his cohort managed to treat each non-answer like it actually meant something.

Afterward, lottery balls were shot into the darkness behind the audience. This was our chance to win a Magic Q-Ball of our very own. You haven’t truly lived until you’ve seen adults scramble around a dark basketball court in the hopes of winning a $32 piece of plastic.

In retrospect, it’s odd that no one asked if the future-predicting sphere, which for some reason had to be rolled to perform its magic, was itself possessed by Satan. Seems like people who believe an all-powerful satanic cabal controls the world would be curious about this.

Nothing about the Red Pill Roadshow made much sense, of course. Why would anyone pay $25 and travel to Jacksonville to endure eight hours of content available online for free? One woman said she’d come all the way from Kentucky! How do they believe such garbage? The lies told onstage were too numerous to count.

But to focus on such things is to miss the point of QAnon.

To paraphrase Ben Shapiro, who’s on the QAnon shit list because he doesn’t drink the Qool-aid (soon to be hawked by a grifter near you): QAnon is about feelings, not facts.

Although blind fealty to Trump and fear of the other certainly factor in, the most important of those feelings are the natural human desires to belong and feel special. Its dogma may be laughable, repugnant, and insane, but QAnon appeals to people who are isolated, lonely, and afraid that their lives are meaningless, plodding journeys from cradle to grave.

Yes, many are deeply gullible, some are nuts, and most of its “stars” seem to be in the snake oil business. But believers just want to be part of something that matters, a force of good in a world full of evil.

In this aspect, QAnon isn’t that different from religion. More than one Red Pill Roadshow speaker spoke of it in spiritual terms. There was a lot of talk about faith, mostly in QAnon.

These quasi-religious characteristics are part of the conspiracy theory’s appeal, how it’s attracted millions worldwide via its internet pulpit since springing from Pizzagate’s ashes. Its leaders function as clergy—Qlergy?—interpreting and spreading the word of Q.

While roughly 100 people might’ve been a disappointing congregation for the Red Pill Roadshow, each is a potential conduit for Q, missionaries, if you will. These disciples are urged to spread Q’s gospel on the websites that baptized them into the pseudo-faith.

“I encourage you all to continually post,” Natly Denise cooed during her speech.

Because what is posting if not the new proselytizing.