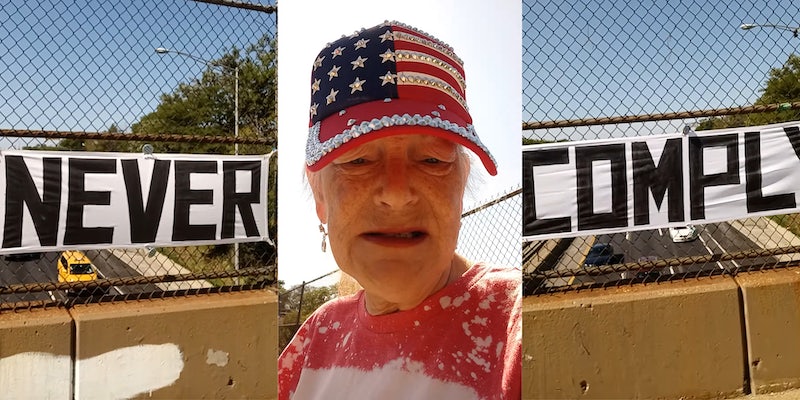 Her fans wanted her to be treated with Ivermectin.

Veronica Wolski, a prominent supporter of the QAnon conspiracy theory, died on Monday after a weeks-long battle with COVID-19.

Best known for hanging conspiratorial banners from a bridge in Chicago, Wolski passed away at the Amita Health Resurrection Medical Center after succumbing to the deadly disease.

Wolski’s death was first announced on Telegram by disgraced attorney Lin Wood, a major figure in the QAnon movement as well as an advocate for debunked election fraud claims.

“I have just learned that Veronica Wolski saw the face of God this morning at 12:44 a.m.,” Wood wrote.

Wolski had spurred a widespread harassment campaign against healthcare workers just days prior after conspiracy theorists began demanding that she be treated with Ivermectin, an anti-parasite drug that right-wing individuals falsely believe cures COVID.

Wood even filmed himself the day before Wolski’s death calling the hospital and threatening staff with murder charges unless the QAnon supporter was given Ivermectin.

In other statements on Telegram, Wood called on his more than 800,000 followers to “ensure that these medical murders stop NOW and the perpetrators be brought to justice.”

“Veronica will be on her bridge in Heaven looking down on us,” Wood said. “We must do our best to make sure Veronica did not leave this Earth in vain.”

As noted by Newsweek, other prominent QAnon figures such as fellow attorney Sidney Powell and former national security adviser Michael Flynn also encouraged their followers to bombard the hospital with calls.

Wolski is just the latest in a growing number of anti-vax conspiracy theorists who have died from COVID. Just last month ex-CIA officer turned QAnon promoter Robert David Steele died from COVID after repeatedly referring to the virus as a “hoax.”