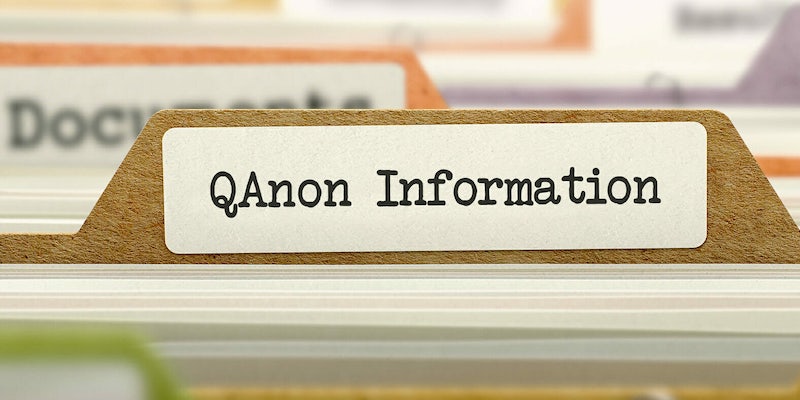 Hold on to your hats, this one gets complicated.

A major QAnon poster posing as a man many believers think is John F. Kennedy, Jr. in disguise is apparently a failed Green Party congressional candidate from Arizona.

@TheRealRaNon, a Twitter account with more than 30,000 followers, was posing as Vincent Fusca, a man many QAnon followers believe to be John F. Kennedy, Jr. in disguise. Fusca is often seen at Trump rallies and has posed for photos with QAnon believers.

“R” refers to the person or people who posted conspiracy theories on QAnon forums this summer for a month when Q went dark. R’s postings fueled the idea that JFK Jr. is somehow involved in the Q conspiracy theory.

@TheRealRaNon appears to have been an account created by Ray Parrish, a 2016 Green Party candidate in Arizona, as Medium user Douglas Stewart discovered. The account, now deleted, was previously named “RayaAndJill2016” and “RayParrishAZ.” Whether Parrish himself changed the tone of the account, or it was hacked, the content changed from stories about the Dakota Access Pipeline to promises of a Vincent Fusca presidential campaign in 2024.

What’s more, the account was promoting conspiracy theory-related books through affiliate links, meaning a portion of the proceeds from any products sold goes back to the owner of the account. Some of the links matched with links Parrish had used to sell products on other accounts.

Parrish denied that he was behind the account in an interview with the Daily Beast and said he would find out who was using his account to promote conspiracy theories.

“Let’s put it this way,” he told the Daily Beast. “You end up with many different social media accounts, and you’re not necessarily behind all of them.”

Parrish also blogs about crude oil trading and archery; both of those sites feature affiliate links.

Parrish’s congressional run was apparently supported by the Arizona GOP; they sent out fliers pitting him against the Democrat in the race, in order to split votes in favor of the GOP.

While @TheRealRaNon is no longer active on Twitter, that just adds to the mythos of QAnon; some believers simply think “R”/Vincent Fusca/JFK Jr. is simply being silenced because he knows the truth.

The Daily Dot reached out to Parrish for comment, but he has not responded as of this writing.