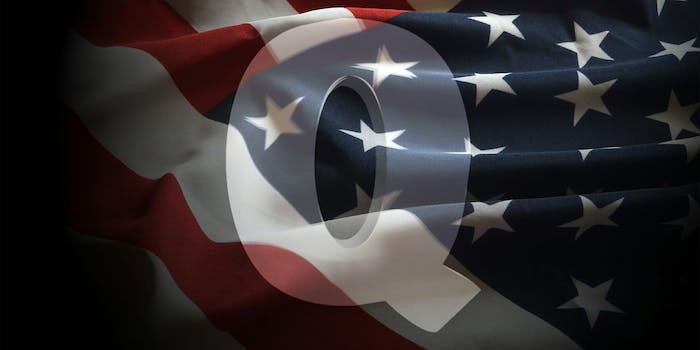 QAnon believers are taking Trump’s presser as a sign

He used a certain phrase.

In an hourlong press conference on Wednesday, President Donald Trump pointed out GOP gains in the Senate, told a reporter she was racist for asking about white nationalism, claimed to have never heard of Lil Jon, despite evidence to the contrary, and drove QAnon believers nuts by saying of Democrats, “These people are sick.”

As Daily Beast reporter Will Sommer pointed out, “These people are sick” is something of a catchphrase among devotees of QAnon, the bizarre conspiracy theory that claims, among other things, that powerful Democrats like Hillary Clinton and Barack Obama are part of a shadowy cabal of pedophiles, and that Trump is going to put them and their compatriots in prison for their long list of crimes.

Followers of QAnon on Twitter started buzzing about the president’s phrasing on Wednesday afternoon.

We are going to show you a new world.
Those who are blind will soon see the light.
A beautiful brave new world lies ahead.
We take this journey together.
One step at a time.
WWG1WGA!
Q

And @POTUS just said "these people are sick"#WWG1WGA #Qanon pic.twitter.com/Wmn82QGBni

And a quick look at older posts reveals several instances of QAnon believers using the phrase.

Iran general responds to Trump's 'Game of Thrones' meme with one of his own#Iran next
Regime in trouble.
People awake.
Projection.
These people are sick.
WINNING.
Will Iran expose the names of corrupt officials?
Pickle
.@POTUS .@IvankaTrump .@GenFlynn #QAnon #NationalSandwichDay pic.twitter.com/B3YK6NtozD

It seems to be the latest instance of QAnon believers picking up on relatively innocuous phrases from a president who puts little thought into the words he’s saying.

At a July rally, for instance, Trump repeated the number 17 several times. QAnon believers took it as a special reference to them, since Q is the 17th letter in the alphabet. Trump was merely stating the number of times he had been to D.C., which, although weird, was probably not a secret message to followers of a conspiracy theory.

QAnon got its start right around the time Trump vaguely referenced “the storm” while posing for a photo op with military personnel in October of last year. Q took it to mean the MAGA revolution, which would put all of Trump’s enemies, including Obama, Clinton, Huma Abedin, John McCain, and many others, in Guantanamo Bay.

Although Q seems to have mostly died out after its brief moment in the sun this summer, followers searching for meaning will undoubtedly continue finding it in the things Trump says.