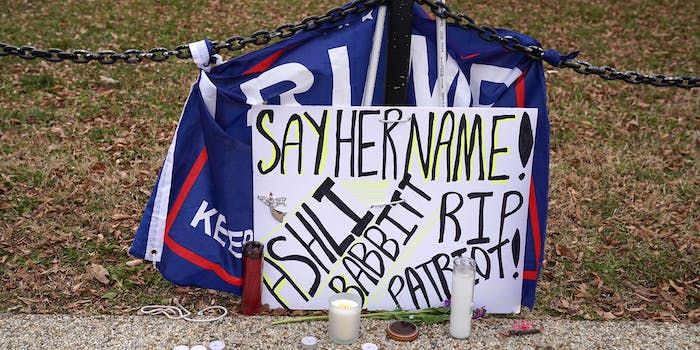 It's hard for loved ones to listen to what their QAnon-believing friends and family thought this month.

Because QAnon believers played such a significant role in the attack on the U.S. Capitol on Jan. 6, the cultish conspiracy movement has gotten the most media exposure it’s ever had in its brief history. And for every Q believer arrested, from the fur-clad “Q Shaman” to the Q shirt-wearing invader who fought with Capitol Police officer Eugene Goodman, there were far more who weren’t in Washington that day, but still saw the insurrection as helping to fulfill their dreams of a “storm” that would sweep away the deep state and Democratic power elite.

Virtually all have baffled loved ones in their lives—friends, relatives, children, spouses—struggling to figure out what happened to the person they used to know. To get a sense of how the Capitol insurrection went over with the rank-and-file Q believer who wasn’t in D.C. that day, the Daily Dot put out a call for the loved ones and friends of Q believers to share their story of how the Q-pilled person in their life reacted to the attack, and what they think of Joe Biden taking office.

Daily Dot received dozens of responses. They tell a story of a movement that, while reeling from Joe Biden’s inauguration, is also resolute in believing that the events leading up to it were scripted by the deep state. Most Q believers remain defiant, dug in, and wedded to the story that the insurrection and its aftermath was merely another step on the way to the bloody utopia Q has promised.

All names have been changed to protect the identity of respondents.

Overwhelmingly, Q believers thought the attack on the Capitol wasn’t an attempt to kill members of Congress and overturn the results of the election, but a faked attack by anti-fascist groups and Black Lives Matter activists pretending to be hardcore MAGA supporters. Despite absolutely no evidence for this whatsoever, this was one of the first “alternative” narratives to emerge from the insurrection, and it found ready and willing conspiracy theorists ready to embrace it. The fact that many of these people wanted to overthrow the government and cancel a fair election won by a liberal, only to blame it on liberals once their coup attempt failed, was entirely lost on every Q believer in the life of everyone Daily Dot spoke to.

Again and again, Daily Dot heard stories of a cross-section of people—young and old, men and women, liberals and conservatives—who used Q’s mythology as the corkboard for the various red strings tying together all of their conspiracy theories about the attack. One of those strings involved the “shaman” figure in furs and facepaint seen busting into the House of Representatives. Known to the legal system as Jacob Chansley and currently sitting in prison pending his trial on charges related to the attack, the shaman’s role and brand were so outsized that many thought there was no way he could be anything other than a plant or shill.

Stanley was a respondent with a “Q person in his life” who was “fixated on the idea that this was a false flag,” and not an insurrection. Not only that, but the “Q Shaman,” was a “plant and [….] antifa all along,” with the attack “orchestrated to hurt the president and sweep Biden into office.” And it would work because the mass of citizens was “too stupid to detect the manipulation being done to them.”

Hannah’s friend, a “white, upper-middle class woman who entered Q through anti-vax, vaccine-choice type groups” despite having “strongly left-wing” politics, believes “the guy in the fur and horns [was] just a distraction. She also keeps saying that Trump is calling for ‘peace’ and bemoaning how social media is silencing him” in response to his permanent suspension from Twitter.

“Her posts indicate that she believes the Capitol raid was planned, and that this is how ‘they’ will obtain the information that will bring down 98% of the government,” Hannah concluded.

Even the preponderance of QAnon merchandise and known figures in the right-wing extremist world didn’t persuade the Q-pilled close friend of Lisa, who wrote “they believe these people are antifa even though these same people are admitting to being QAnon.”

“She believes the Q Shaman is being paid to show up to Trump rallies and has nothing to do with QAnon’s real plan,” Nick wrote in, adding to the narrative of Chansley’s “infiltration.”

“Regarding what happened at the Capitol, she believes it was staged and it was crisis actors who stormed the Capitol and it was done purposely in order to stop information from coming out during the objections to the election.” Why would this be done? What information could possibly be concealed through an insurrection? Nick’s friend “believes the mission was to steal a laptop”—likely the influence of one Q believer actually swiping Nancy Pelosi’s computer and attempting to sell it to Russian intelligence.

Bill told Daily Dot, “my [elderly] Dad doesn’t believe the insurrection attempt was done by Trump supporters. He’s convinced it was a false flag operation by antifa.” His father’s paranoia was infecting other relationships in his family, as Bill continued that his father was “arguing with my aunt online about how it had to be antifa because Trump followers are good people.”

Edward’s sister in Kentucky had been “following the plan” for a year, and when he talked to her after the Capitol attack, she rhetorically asked him “what was violent about it?” and claimed she “knew people that were there.” He recounted her saying people “said there was definitely antifa among them and when Trump said to be peaceful, they all went home and antifa stayed and damaged the Capitol.”

According to Edward, his sister also believed that the Capitol Police officer killed in the attack did not actually die and that Ashli Babbit, the Q believer shot and killed during the insurrection was “peacefully protesting.” And all of it was the fault of Barack Obama “for [creating] all the division in the country.” Edward’s sister has remained defiant since Biden’s inauguration, telling him in a text it “sucks [that] a fraudulent election was certified for Biden,” but she will continue to trust the plan.

Another sibling lost to Q and conspiracy theories was the brother of Chris, “a QAnon believer [who] thinks antifa infiltrated the ranks of the MAGA protesters and started the riot.”

“As a young man he struggled with addiction but turned it around and built a very successful business and is also a great father,” Chris continued, trying to make sense of what happened to his brother. “It really blew my mind to find out what he was into. As far as Biden’s inauguration, I can’t imagine he will accept it. He thinks it will lead to one world government, communism, no religion, no guns, [and] no freedom.” And like Edward’s sister, Chris’ brother hasn’t been prompted to go back on his beliefs by Biden’s inauguration, texting his brother that the election was stolen, and “everyone knows it” because the attendance at the ceremony was so low and “hundreds of thousands [of people] were waiting for Trump in Florida.” (This does not appear to be true.)

Stanley’s Q believing friend thought that “the war isn’t over and Trump and the movement will continue on and stay in the fight,” while Tiffany’s mother insisted that “Joe Biden and his family would soon be arrested” for an unspecified crime. Another responder, Vincent, has a Q believer in his life who is “certain the protestors were antifa [and that] Trump is executing his master plan which includes, but is not limited to military involvement.” According to Vincent’s friend, because Trump never conceded, the only peaceful transfer of power he intends to be part of is to his own second term. “[Declassification] is coming and there will be no inauguration,” he concluded.

The struggle of loved ones and friends to understand is engulfing whole families, including Amy, whose relative “sent this on a family text chain regarding the capitol insurrection:

“This was after she told her grandson he was a ‘satanic Antifa.’” Amy continued. “She is enabled by one of her four kids who is also deep in QAnon. She’s essentially disowned the other three.”

At least one responder believed a Q-believing friend was at the insurrection and may have even played some small role in it. Derek writes “a friend of mine really got into Q stuff over the late spring and summer of 2020.

“On the day of the insurrection, he posted a couple videos of him literally on the steps of Capitol building. I don’t think he went into the building [but] he was in the rally, he was at the Capitol building, on that step. Still, like so many others, Derek’s friend insists that it was antifa that incited the violence, and anything else that happened didn’t actually happen.

“He ‘witnessed’ it and anything beyond that isn’t real, simply because he wasn’t ‘close enough’ to see it,” Derek wrote. “I want to bring him back but I don’t know how other than just checking on his stories every other day knowing he’s at least alive.”

Finally, Paul shared a harrowing story of what happens when a friend became “erratic and hysterical” thanks to Q, including losing his job due to lashing out at another employee over it.

“I asked him what he thinks [about the insurrection], and he thinks that the government may have thwarted Q’s plan but he retains hope that Trump isn’t actually giving up,” Paul wrote. But his friend had embraced more than just conspiracy theories about Trump actually winning, and had descended into hardcore and violent coronavirus denial—a reminder that all these theories are linked and believed by the same people.

“Eventually he got pretty upset at me since I am a medical student and have been pleading for people to respect COVID restrictions, which he believes are drummed up by doctors faking death certificates,” Paul wrote. “We had disagreed strongly before, but [recently] he ended our conversation by saying he just hopes ‘more people will shoot doctors.’”

“I don’t think I will ever talk to him again.”