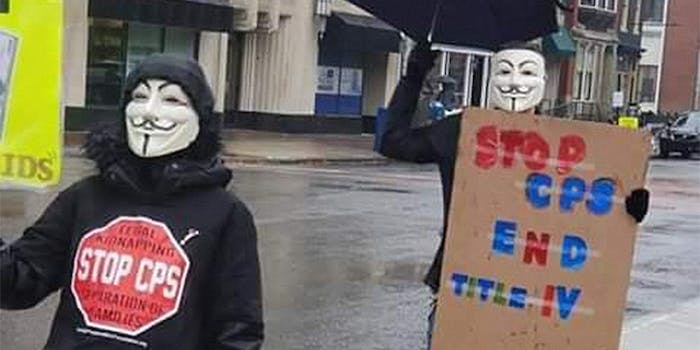 Before QAnon, Anonymous was leading Save the Children marches

The curious similarities between Anonymous in 2015 and QAnon today.

“Operation Expose CPS” launched on Facebook, Twitter, and YouTube, on Feb. 16 with the express goal of outing pedophile rings in the highest levels of the Democratic party and taking down child traffickers hiding throughout the government. It included an express call to action.

“Our goal is … to demand that the FBI do their jobs and investigate the CPS/DHS system …. demand that all connections with Jeffrey Epstein be investigated … including former President of the United States Bill Clinton…as well as any other elite(s).”

“Operation Expose CPS” put Hillary Clinton in its sights as well, explicitly accusing her of masterminding the theft of kids across America, a villain as sadistic as any in the world.

And as the movement grew, it culminated in a march to force the government to help save missing and exploited children.

It is a QAnon operation if there ever was one, helping push the conspiracy that government child protective services are really cover for child trafficking rings and that the deep state is determined to keep the pedophiles in charge behind it safe.

So while it couldn’t have QAnon ties, who first posted in November 2017, there is no doubt an Anon element to it. The hacker collective Anonymous. And looking back at the world they sold to believers, it’s hard to deny how Anonymous sowed the seeds for the explosion of the Q movement.

QAnon is a bizarre cult that believes the world is controlled by Satan-worshipping pedophiles consisting primarily of actors and Democrats. And “Q” is an elite government employee providing information about the conspiracy on the internet, first on the message board 4chan, and now on its stepchild 8kun.

Anonymous, meanwhile, is a decentralized hacker collective. Beginning in 2003 on 4chan, the same internet message board that QAnon originated on, the group has since exploded in size and reach, having hacked Scientology, Wall Street, and American police departments.

Neither Anonymous nor QAnon have a formal structure or public leadership. Q, however, is an enigmatic leader. Perhaps the one Anonymous never had.

The movement by Anonymous, known as OpExposeCPS was able to bake in support for QAnon when it first posted, stoking the same fears of Democratic pedophiles and elite sex trafficking rings, sending out similar messages well in advance of any QAnon post online.

The official “Operation Expose CPS” Facebook page, as well as other Facebook pages and graphics linked to this Anonymous announcement on its website, originally focused on calling out Child Protective Services.

In a video for the launch, in February 2015. the hacker collective declared long before Q’s rise that it was time to save our children.”

The quotes from the video sound like a more ominous QAnon: “Greetings world… For far too long, the authorities in America have ignored the rampant child abuse deeply embedded into child protection agencies,” they said, announcing the launch to the world. “No big players are brought to justice.”

In a November 2017 drop, one of Q’s first posts, Q echoed those kinds of concerns. “Perhaps [Trump] could not stomach the thought of children being kidnapped, drugged, and raped while leaders/law enforcement of the world turn a blind eye,” Q wrote, setting the stage for the movement’s obsession with child trafficking.

This summer, the QAnon obsession with child trafficking exploded, as Save the Children Marches were held in cities worldwide. But that isn’t new. Those were also inspired by Anonymous.

A month later, Q posted for the first time. And a great deal of the movement seems cribbed from OpExposeCPS. The 800,000 missing children that’s become a staple of followers’ belief systems? Pushed by OpExposeCPS.

It could be chalked up to a complete coincidence, two unique anonymous cliques both obsessed with supposed missing and exploiting children. But now, these same Facebook pages pages are pushing QAnon content.

Posts appeared promoting “Save The Children”, the QAnon marches from this summer. The site has said, “We Are The Storm,” using QAnon’s official slogan.

And anti-Semitic conspiracy theories connected to QAnon that actors and Democrats are drinking a chemical called “adrenochrome” from children’s blood get posted to OpExposeCPS.

Because Anonymous allows anyone to operate under their moniker, there are obstacles in determining who started “Operation Expose CPS,” whether the same people are behind QAnon, whether the similarities are just coincidences, or whether the Operation CPS creators merely transitioned into QAnon supporters.

Indeed, in 2018 Anonymous openly declared “war” on QAnon, a seemingly contradictory position. However, Anonymous made a curious statement during that time. Q had been “funny” toward its activists at first, but now had gone “too far.” Claiming they knew Q’s identity, they vowed to take them down.

The Daily Dot was unable to find any evidence they did, although it has been speculated that the identity of Q has changed over time.

“Expose CPS” also frequently shares posts by “CPS News Network” a QAnon page with an identical mission. Perhaps the name and the mission statement being the same are mere coincidences; but while there’s no proof that people involved in Anonymous started the Q hoax, an organization with a global reach would certainly be able to help flood and advance Q when it first took off.

Which the movement just so happened to do, with an audience primed to believe the deep state was harboring child traffickers. Everyone didn’t just suddenly start believing that one day. It had to come from somewhere. And that’s likely Anonymous.