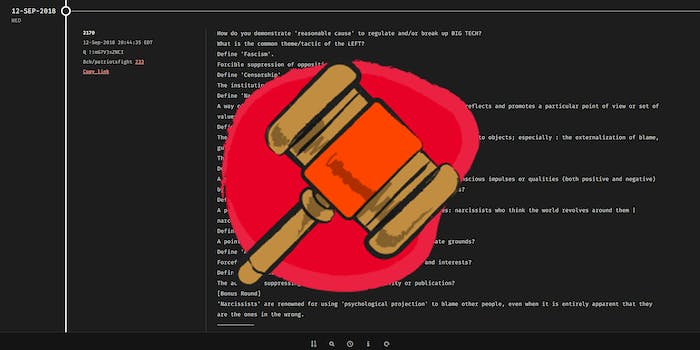 Surprisingly, there are only a few places left to go online.

While QAnon Reddit forum r/greatawakening only had about 70,000 members, it was a key hub for discussion and analysis of Q posts.

For many fans of the mysterious persona, it was their way to talk about Q and his “drops” in a place that was safer and easier to navigate than anarchic image board 8chan (where the posts originated) but with less heavy-handed moderation than Twitter.

That’s gone now, as Reddit dropped the hammer on r/greatawakening and numerous other Q subreddits, banning them all on Sept. 12.

Here is a list of some of the subs banned along with #theGreatAwakening board on #reddit I took a screen shot, so y’all could see the comment that there are more that were banned. #gotovoat #maga #GreatAwakening #qanon #q #wwg1wga @LisaMei62 @prayingmedic pic.twitter.com/diYQYgwas7

While there’s no indication as to what the final straw was for Reddit (if there indeed was one), a spokesperson for the site told Daily Dot that the ban was standard practice for communities regularly engaged in “posting content that incites violence, disseminates personal information, or harasses.”

The sudden banning of their main subreddit drew shock from QAnon believers, who genuinely think their movement based around the extrajudicial trial, imprisonment, and execution of suspects without due process is a patriotic, non-violent crusade. Mainstream conservatives mostly steered clear of it (as they have since Q’s inception), while Q skeptics gloated.

But the core of Q’s “bakers” reacted to the news by reiterating their commitment to the movement, no matter what “censorship” is foisted upon them.

Others asked why, if QAnon is fake or a conspiracy theory, Reddit would bother banning communities dedicated to it.

This is a standard Q argument—that despite calling it a conspiracy theory or live-action role playing game, the mainstream media is scared of Q because many outlets write negative stories about it, often in coordinated waves using pre-distributed talking points.

This belief (which is not actually true) led many to deduce that Reddit is somehow compromised, or that the QAnon person is “over the target” and close to breaking massive news that the cabal would do anything to keep secret.

If #Qanon is such a scam. Why did @reddit just memory hold every major Q-related subreddit off its platform?

As of now, the board, which has almost ten times as many subscribers as greatawakening did, is still around.

And of course, it brought a response from Q him/her/themselves, who posted several times after the news hit. First, Q claimed that “THOSE THEY ATTACK THE MOST ARE THE BIGGEST THREAT” and to “EXPECT TWITTER/FB FORCE NEXT.”

Then there came a much longer, less comprehensible post insinuating that the ban was fascism, projection, censorship, dogmatic, and narcissism; followed by a long string of links to stories about the ban.

While Q and his believers rallied together, it wasn’t clear where they’d go to replace the community they’d built on r/greatawakening.

In the immediate aftermath of the banning, r/conspiracy was flooded by posts declaring that it was mass censorship, the end of Reddit, the end of internet freedom, a leftist plot, and an obvious ploy by the cabal to distract from the upcoming disclosure of classified FISA-related material.

Reddit was, for the moment, allowing all of these threads to stay up, indicating they might tolerate QAnon related material as long as it doesn’t veer into violent threats.

This is essentially what happened the last time the site banned a Q-related sub, r/cbts_stream (for “calm before the storm.”) The sub was pulled down for the exact same reasons as r/greatawakening, inciting violence and harassment.

The ban spawned a brief attempt to “discredit Reddit” as a censorious violator of the First Amendment, but what it mostly did was drive believers to other Q-related subs, including r/greatawakening, which was allowed to stay active.

Even though r/conspiracy seems like a safe space for Q believers for now, many are once again promising to abandon Reddit for more conservative-friendly alternatives.

@reddit You Owe Alot of True American Patriots a explanation for this act against The 1st Amendment. I beleive Censorship was one of the first moves of the Nazi party to keep the people from there true motives by silencing any1 exposing there corruption! #qanon #GreatAwakening pic.twitter.com/HAlMRQMTW9

Chief among these seemed to be Voat, the conservative-leaning news aggregator and message board described as an “alt-right Reddit clone” by New York Magazine and by Gizmodo as a “refuge for the communities deemed too hateful or toxic to exist” on the already-lenient Reddit.

With its identical design and format, Voat seems like a logical place for Q-believers to migrate. But Voat’s QAnon sub picked up just a few thousand subscribers in the day after the Reddit ban, and has nowhere near the numbers that the r/greatawakening had.

The site has also been beset by financial problems, nearly closed in May 2017, and still has virtually no footprint outside hate groups and trolls.

There’s also the possibility of r/greatawakening users moving to 8chan, the image board that’s the home of QAnon’s posts and where much of the initial discussion and analysis takes place.

8chan is currently handling the QAnon subreddit ban by comparing it to a Nazi pogrom. pic.twitter.com/fUNIBnEAvE

Twitter already has an active community of #QAnon “bakers,” but it’s disorganized and not the ideal place for long strings of posts discussing Q.

Finally, there a number of active QAnon communities on Facebook, a place that’s already shown itself to be an ideal incubator for conspiracy theories and nonsensical plots.

But Q is expressly anti-Facebook, and it seems like the company might not want to be associated with a movement that even Reddit wants little to do with.

It’s not clear so far what the r/greatawakening ban will do for the Q movement in general, a conspiracy already best by a persecution complex and a belief that a dark cabal is censoring patriotic conservatives.

Some people who have been casually involved might fall away, but the hardcore believers are already digging in deeper and looking for other places to take their analysis. It might turn out to be a new Reddit thread, or Twitter, or something else.

But either way, it doesn’t look like Q itself is anywhere close to burning out—and the Reddit ban might only fuel the movement’s belief that there’s a grand conspiracy out to get them.