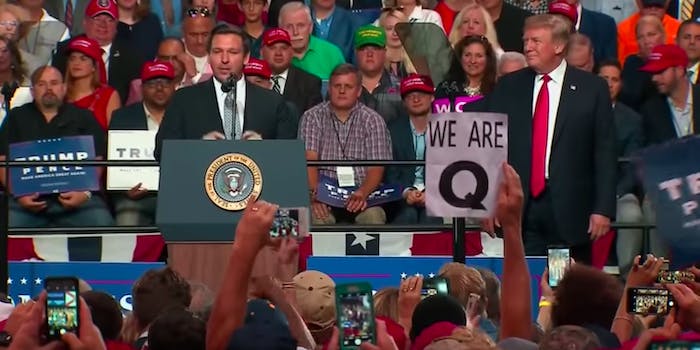 The rally was a huge breakout for the conspiracy theory.

President Donald Trump’s rally in Tampa last night might have been the usual mishmash of platitudes, off-the-cuff meanderings, and semi-true boasts, if not for one thing: the vocal and visible presence of believers in the conspiracy theory known as QAnon.

The conspiracy theory is that a Trump is leading a secret effort to arrest and detain tens of thousands of pedophiles and deep state Democrats—with an administration insider leaking intelligence to anonymous followers on the imageboard 8chan.

Last night’s rally was thick with people holding Q signs, wearing Q shirts, and shouting Q-approved catchphrases. And they seem to have been heard.

And after mostly deriding the conspiracy theory over the last few months, major media outlets finally seemed to realize how vocal Q’s supporters are, how in thrall they are to Trump, and their potential for violence.

No hyperbole. If QAnon hits cable news, people are going to get seriously hurt.

Their coverage was not especially flattering and painted Q believers as paranoid nutcases spouting demented gibberish.

One Washington Post story on the rally called QAnon “a deranged conspiracy cult” featuring “a real-life show of force for the community that has mostly operated behind the veil of anonymity.” Another look by the Post pointed out the potential for violence among Q believers, calling the vocal minority “cultish,” a “dark novelty,” and “a crowd that likes guns.”

Esquire wrote it off as a “fully insane conspiracy theory” and “a paranoid, delusional fantasy.”

Needless to say, this is not how QAnon believers see themselves. Nor is it how they saw their presence at the Tampa rally.

To them, the rally was confirmation that the plan they’ve put their faith in was real.

They saw the derision from the mainstream media as proof they’re “over the target,” and that if the media is “scared” then they’re on the right track.

Even Q himself seemed to delight in the coverage, posting a morning after intel drop with a long list of mainstream media articles, along with a screencap of “QAnon” briefly trending on Twitter.

But virtually every Trump rally turns into an anti-mainstream media bonfire. This rally was different, because it also seemed to confirm what Q believers have been fervently speculating for the better part of the year: that Trump is either aware of Q, or actively involved in posting Q drops.

There’s been an enormous amount of speculation as to who Q really is—is he really a Trump insider or is he just some guy winding up an ever-growing group of followers.

If someone was on the fence about who Q was, and went to a pro-Q place like the subreddit r/greatawakening, they’d be deluged with circumstantial proof that Trump confirmed his status as either being Q or being in on Q

For one thing, it’s likely not a coincidence that Q timed drop number 1776 to come out during the rally, and Q believers had been speculating for weeks that it would be something special.

And they were seemingly rewarded for their faith, with drop 1776 being a close-up of what appears to be a partially obscured signature by Donald Trump, along with “#1776”—a likely reference to the drop number.

There were also some more visible incidents during the rally.

One was Trump seemingly pointing to a large cut-out letter Q—an incident that quickly got rolled into the mythology when Q himself used it as post 1777, and the holder of the cut-out took to Reddit to announce who he was, getting a shower of praise from fellow believers.

Then were Trump’s odd references to the number 17, saying several times that he’d only been to Washington “maybe 17 times” before being elected president.

Q is, of course, the 17th letter of the alphabet—a fact that Q believers love pointing out.

The reaction from Q believers to both the mainstream media coverage and the seeming clues from Trump was a kind of joy normally seen only in clips of live performances by the Beatles.

Of course, a skeptic might point out that drop 1776 doesn’t confirm anything, and that President Trump’s signature is fairly easy to fake—not to mention that the signature and written number look they were photographed at different times.

Beyond that, pointing at random people during rallies is a Trump signature. And if Trump really wanted to make a reference to Q, he could just do it, rather than use oblique references to the number 17.

In fact, Q’s self-imposed deadline that July would be “the month when the truth was revealed” seemed to come and go with no major revelations that helped prove anything about his theories.

This is the impasse that all major conspiracy theories eventually hit—there’s not enough evidence for the conspiracy to convince non-believers, and true believers won’t be swayed by evidence against the conspiracy, no matter how much there is.

So we’re likely to see more Q signs and shirts at rallies, more befuddled mainstream media coverage, and a growing potential for violence when these two immovable objects meet.