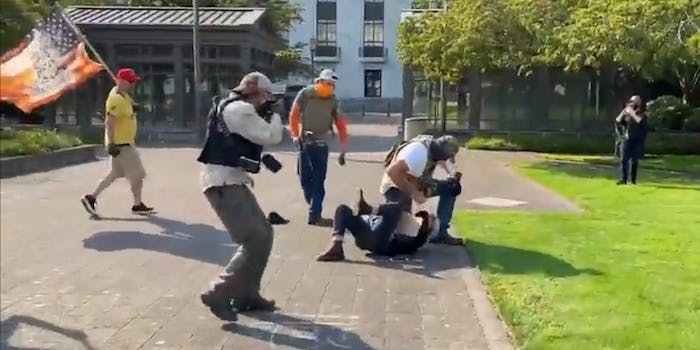 The far-right men's organization was attending a pro-Trump rally.

Members of the far-right men’s organization the Proud Boys attacked a group of Black Lives Matter counter-protesters in Salem, Oregon, on Monday.

After arriving in Salem, the Proud Boys linked up with several dozen Trump supporters outside the Oregon State Capitol, where they encountered a smaller group of Black Lives Matter (BLM) counter-protesters. They rushed the BLM demonstrators and assaulted them with baseball bats and, according to the Associated Press, paint-gun pellets.

A video uploaded to social media shows the Proud Boys knocking a BLM protester to the ground and using homophobic slurs before being handcuffed by police. Another video shows a Proud Boy punching a BLM protester in the back and a woman spraying him with what appears to be mace.

“That’s for everything that you fucking did to me, bitch. Told you I’d get you,” the woman tells the BLM protester.

Twenty-year-old Eddie Coleman, one of the BLM supporters attacked by the Proud Boys, told New York Times reporter Mike Baker they joined the protest after a friend called for backup on social media because “there were a lot of Proud Boys with weapons and a lot of white supremacists and they were outnumbered.”

“When I stood my ground, finally one of them pushed me to the ground and hit my face repeatedly and kneeled on my chest with his full weight until finally somebody pulled him off,” Coleman said.

Baker also uploaded video that showed Salem police pleading with the right-wing crowd, including the Proud Boys, to go back to where their rally was supposed to be held.

“Let’s agree that we’re not gonna agree and stop,” an officer told the crowd. “Everybody, go back to your side over there now.”

The showdown between the Proud Boys and BLM supporters took place just over a week after Aaron “Jay” Danielson, a supporter of the far-right activist group Patriot Prayer, was killed on Aug. 29 as Trump supporters clashed with protesters in Portland.