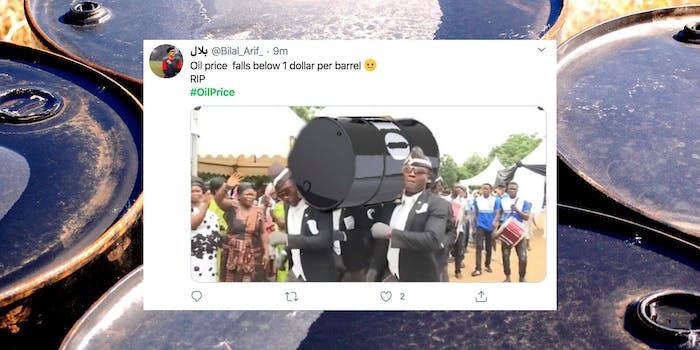 Everyone wants to buy a barrel of oil after prices plummet

'Been looking to invest and looks like the perfect time to become an oil barron.'

The price of oil plunged to the lowest level in history on Monday in yet another example of the coronavirus pandemic’s impact across the globe.

As reported by CNBC, “a futures contract for U.S. crude prices dropped more than 100%” and became negative for the first-ever as demand for the commodity continues to drop.

For some reason, the news became a topic of interest on Twitter and began trending under the #OilPrice hashtag.

Reaction to the issue ranged from the angry to the nihilistic and even produced a wide array of memes, as any good trending topic should do.

Some responses attempted to outline the seriousness of the unprecedented situation.

“Oil is absolutely collapsing,” @ExpiredOvaltine wrote. “If you aren’t paying attention you should be.”

Others mocked recent tweets from President Donald Trump in which he boasted of a new oil deal with OPEC and Russia.

But the best reactions noted how even people economically gutted by the coronavirus could now become an oil magnate.

“Been looking to invest and looks like the perfect time to become an oil barron,” @CamdenRaynor said.

Many were even worried that no one would stop to think about those poor oil industry titans and the military-industrial complex in these trying times.

“America looking at the trillions it has spent in war only to have oil cost less than a bottle of Coke!” @DANIA_SHABBIR said.

With oil officially dead, at least momentarily, there was only one thing left to do: Bring out the dancing pallbearers, of course.

“US crude oil futures fall below $0 for the first time in history. Unbelievable,” @hashtagtweets_ said. “Btw who did this?”

Oil is expected to rise again, however, so enjoy the memes while they’re still here. Or at least until the next coronavirus-related catastrophe brings out Twitter’s much-needed gallows humor.