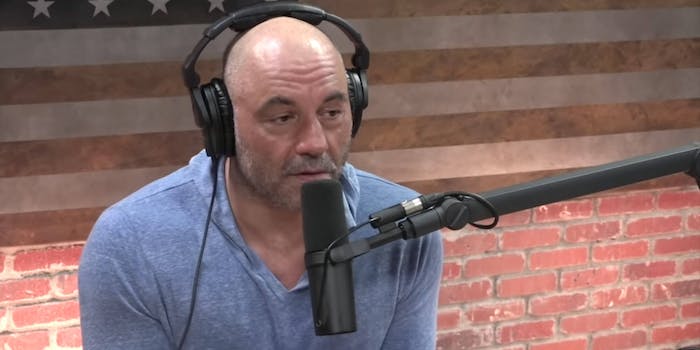 'I'm just going to test myself every three or four days.'

Popular podcast host Joe Rogan has drawn the ire of some fans after bragging about being able to receive multiple tests for the coronavirus.

During his The Joe Rogan Experience podcast on Wednesday with comedian Chris D’Elia, the former Fear Factor host stated that he had received two tests for COVID-19, the disease caused by the coronavirus, in just the past few days.

“I got tested yesterday, and I got tested two days before that,” Rogan said. “I’m just going to test myself every three or four days.”

D’Elia later admitted in an interview with BUILD that he had been tested by a doctor at Rogan’s studio prior to appearing on the podcast.

The tests, which check for the presence of antibodies, are being administered by Dr. Abe Malkin of Concierge MD LA. Los Angeles residents able to afford the $299 test can have it administered at their home. As reported by Vice, the test has not been approved by the FDA.

But D’Elia is not the first guest to receive a test for the disease. Fellow comedian Bryan Callen also posted video online showing his negative test results before appearing on Rogan’s podcast.

Many have expressed anger over Rogan’s statements given the inability of many across the country to receive such testing.

Reports have even indicated that doctors on the frontlines of the battle against COVID-19 have been unable to get tested.

“A close friend, a doctor, presumably had Coronavirus but couldn’t get tested in NYC,” @RKlein90 wrote. “Cool that Joe Rogan is able to test his pals like it’s nothing.”

Even fans of Rogan appeared displeased with what some described an abuse of testing kits.

“Huge fan of @joerogan but hearing him talk about how he’s abusing Covid-19 testing kits to test whoever’s on his podcast before he interacts with them and taking 2 tests 3 days apart at his leisure when people are still struggling to get tested is infuriating,” @dcolon13 said.

But others pushed back, noting that the kits weren’t the highly sought after nasal swabs tests.

Malkin, the doctor performing the tests for Rogan and his guests, told Vice that he makes this evident to those who request his services.

“I give everyone a disclaimer, it’s not FDA approved, you can’t use this for diagnosis, it’s more for peace of mind, for epidemiologic data,” Malkin said. “But if they need a definitive diagnosis, they have to get a nasal swab.”

Other fans of Rogan attempted to defend the host as well, arguing that all blame should be placed on the federal government for issues regarding testing.

“@joerogan is using test(s) that aren’t FDA approved,” @ArtoriusDaVinci wrote. “Get mad at our government. Not a ‘PODCAST’ entrepreneur. Tone of anger is misplaced.”

Either way, the situation highlights just how chaotic coronavirus testing remains in the U.S. Despite numerous promises from the federal government, testing is still not close to adequate levels, according to experts and state officials. But even with such scarcity, celebrities, and wealthy individuals seem to have no problem getting tested.

Rogan is just one of many celebrities who have been able to receive tests even without showing symptoms, stirring outrage from a general public devoid of resources to do the same.