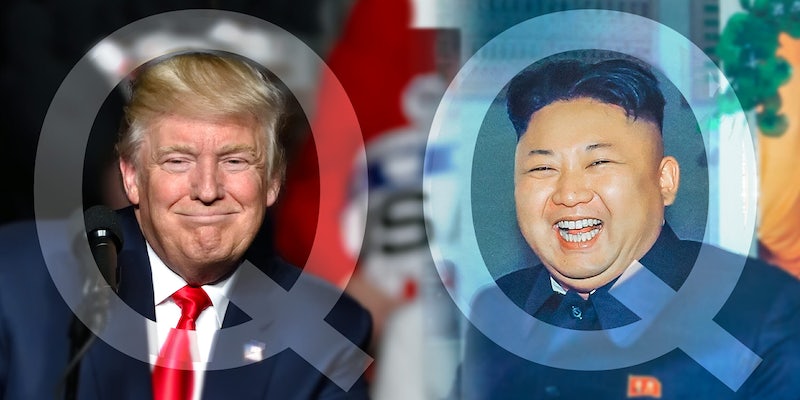 Qanon may have made a mistake this week.

In the QAnon conspiracy theory, almost nothing happens without having a secret double meaning. This goes for everything from minutiae like typos in President Donald Trump’s tweets to major events like the negotiations between the United States and North Korea.

Right before the 2018 summit between Trump and Kim Jong Un, Q spoke of a “deal made” between the two nations, and that the CIA’s “strings” had been cut. The implication was clear: Trump and Kim had already made a denuclearization pact in November 2017, during Trump’s first Asian trip.

Not only that, but it was being kept secret, and the whole Singapore summit was a play to throw the deep state off the trail of what was really happening.

If such a deal exists, it hasn’t been revealed to the public.

And now a second summit between Trump and Kim took place this week in Hanoi, ostensibly to build on the progress made in Singapore.  Naturally, Q had predicted in a recent drop that it would be “historic” and that everything involved had been “planned out ahead of time” as part of a great series of events that would culminate in 21 days.

QAnon believers went along with it, proclaiming it would reunify Korea, end the long war between North and South, and make the world a safer and better place, thanks to President Trump. But unlike the love fest between the two leaders in Singapore, this summit ended in failure as both sides left Hanoi without a deal, pointing fingers over who was to blame.

And one question that nobody asked, either before or after the second summit, was why would the second summit be “historic” and “planned out ahead of time” if there was already a deal? Why didn’t Q mention the “deal” that had already been made in any of his posts? Why even take the risk of a second summit at all, given that QAnon already “revealed” that Trump survived an assassination attempt via submarine-fired-missile on his way to Singapore.

In fact, Q acted as if the fate of the world hung in the balance–throwing up a few photos of the location (likely screen grabs from press pool videos), titled “Peace is the Prize,” to prove he was there, along with a series of ominous numbered posts simply called “tests.”

The #QAnon faithful had sky high hopes for the Saigon summit. Nothing was delivered. pic.twitter.com/zqkuUPTUyD

And if such a deal had been made, wouldn’t now be the perfect time to make it public, with coverage of Michael Cohen’s testimony dominating the news? Sure, President Trump might have been called a conman and a racist who likely committed numerous felonies, but nobody would care if he ended the Korean War and brought the Kim regime into the modern world.

It seems like a pretty major continuity error for the summit to be “historic” and all part of a show at the same time. It’s either important or not important. So why did QAnon make such a major mistake? There are several possibilities.

One is that someone else is running the QAnon account, and intends to take the story in a different direction. Why else would whoever is posting now ignore the previous posts about a deal having been made? Did the deep state sabotage the summit? Was the Cohen testimony their way of distracting the president to the point of being bested by Kim Jong Un? Such events would render whatever “deal” was made previously moot, right?

Does anyone else believe a deal with North Korea has already been made but they chose to delay the announcement due to press coverage of Cohen instead..-21, maybe 3/19 will be the announcement. #QAnon #MAGA #WWG1WGA #qanon

QAnon’s identity is still unknown, with a variety of theories for who is making the posts, encompassing everyone from President Trump himself to a small group of conspiracy grifters.

It’s possible that multiple people post as Q, or that whoever started Q is not the same person as the one currently posting, and that the identity has been “handed off” on several occasions. Even Alex Jones claimed that Q’s original identity was “compromised” in May, with the deep state taking control of the account in order to push propaganda.

There’s some evidence to be found in Q’s posts themselves, which tend to veer wildly in tone and style, going from long lists of rhetorical questions to out-of-context photos to Bible quotes with little rhyme or reason.

Q’s first posts from November 2017 are made in an extremely different style, using concrete predictions with specific names and dates rather than the now familiar drumbeat of rhetorical questions and riddles that Q uses now. It’s possible that the reason for this is because all those predictions failed and Q needed to change styles or risk losing all credibility. But it also could be a sign that the identity was indeed “handed off,” and that the current writer changed Q’s style.

So the change in storylines could indicate someone else running the QAnon account.

I think Pakistan’s behavior over the last few days is why Trump didn’t finish the Nork deal.

Was the cabal making a threat to start a war if a NK deal gets made?

Seems like it. All neatly glossed over with the Cohen distraction.

Pakistan has been exposed. #QAnon

But it’s just as likely that it doesn’t actually matter what Q says, even if one drop contradicts another. Such contradictions are an inherent part of conspiracy theories. Believers are practiced in the art of cognitive dissonance and have little trouble believing two contradictory things at once. A classic example is the idea that Barack Obama was secretly a Muslim and a terrorist sympathizer, while also ordering the mission that killed Osama Bin Laden.

More recently, QAnon pushed the idea that Supreme Court Justice Ruth Bader Ginsburg was being kept alive through “off market drugs,” continuing to stick to it even once she returned to work and began issuing decisions—which would require a conspiracy so massive it would take every other justice to comply with it. Could QAnon believers be conned into thinking Trump and Kim already have made a deal, while simultaneously walking away from a failed summit with an attempt to make a deal falling apart?

Absolutely. And of course, the Q poster would know that, and have the freedom to write anything, knowing it’ll be believed.

It’s also possible that the poster simply screwed up their own continuity. Q has made numerous mistakes before, making typos and correcting them with subsequent posts, along with factual errors and posting fake pictures as real. Naturally, all of these are rolled into the conspiracy, most recently seen when Q posted a photoshopped picture of comedian Patton Oswalt as if it were real, only to backtrack and claim the deception was on purpose when the fake was called out.

Ultimately, whatever QAnon posts is not as important as what Q believers take from it. In the case of the failed Hanoi summit, they’ll take whatever they need to take that furthers their belief that Trump is in control, and (very slowly) eradicating the forces of evil that the last 200 years have kept propped up. Was it a failure sabotaged by the cabal? Was it a secret success that we just can’t hear about yet? Was it both?

It doesn’t really matter, as long as it keeps the story going.