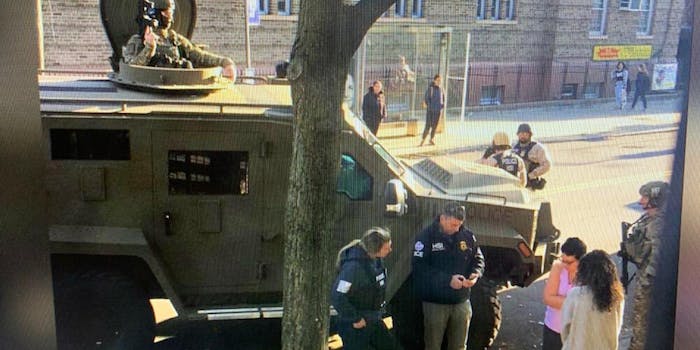 One person was arrested.

Residents of a New York neighborhood said they witnessed an Immigrations and Customs Enforcement (ICE) operation on Wednesday morning that included several armed agents in a military vehicle.

Although New York City was declared a sanctuary city, ICE is still active there and has carried out large-scale raids in recent months. The latest action, on a block of the Ridgeland neighborhood in Queens, appears to have shocked in-person witnesses and online viewers.

Witnesses told Spectrum News NY1 that about 10 Homeland Security Investigations (HSI) agents who were heavily armed entered the building around 8am in the morning and came with an armored vehicle known as a BearCat. Some neighbors were reportedly afraid that the neighborhood was being raided because of the vehicle and the agents’ ICE jackets.

Over the course of the morning, several people were removed from the building by HSI agents, although in the end only one was detained. The Ridgewood Tenants Union shared a picture of the vehicle and agents on the street, with the important reminder, “NEVER open your door to ICE.”

This happened this morning in Ridgewood. HSI, which is a part of ICE, was on Forest Ave between Summerfield St & Norman St. If you have any information, please let us know and NEVER open your door to ICE.https://t.co/ekZqmNrvaD pic.twitter.com/MMRpE34N8O

The picture elicited strong responses not just from Queens residents but from people online who saw the agents as intimidating and over-armed for the situation.

@NYCMayorsOffice @NYCMayor You need to keep this militia off the streets. What a horrible mark on your record as mayor. I'm ashamed to live in a city that allows this.

A spokesperson told the Daily Dot that the agents were part of the HSI Special Response Team. While the HSI is under the jurisdiction of ICE, its operations focus specifically on crimes like drug and human trafficking and child pornography. Per the spokesperson, this was not an immigrant raid. The person they took into custody had a warrant for their arrest and was considered high-risk, which is why agents used such heavy equipment. The spokesperson for HSI did not name the arrested person but said they are awaiting trial in federal court.