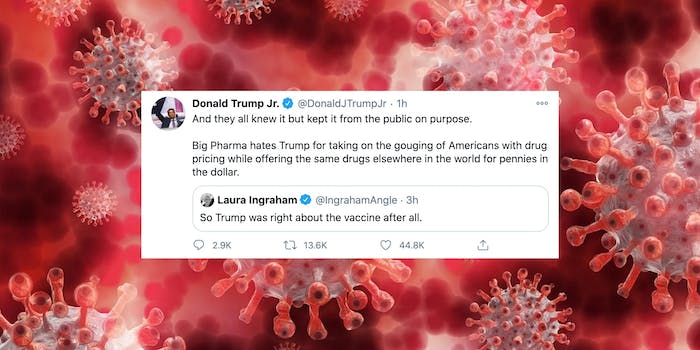 Despite the uproar, Pfizer admitted weeks ago that it wouldn't have results until mid-November.

Conspiracy theorists online are convinced that the pharmaceutical giant Pfizer purposely waited until after the presidential election to reveal its coronavirus vaccine.

As Pfizer announced on Monday that its vaccine had shown in trials to be more than 90% effective in protecting against COVID-19, supporters of President Donald Trump began to suggest that the breakthrough had been purposely withheld.

“Color me crazy… but I think Pfizer knew they had this vaccine ready to go BEFORE Election Day,” conservative Twitter user Tim Young said.

Other prominent right-wing figures argued the same, even claiming that Trump would have likely won re-election had Pfizer’s announcement been made just weeks prior.

“If news of #Pfizer miracle vaccine had come just two weeks earlier, the results of the election might have been different,” Geraldo Rivera said. “It was the urging & inspiration of @realDonaldTrump that drove the timing of this potentially history making, life-saving result.”

The president’s son, Donald Trump Jr., repeated the conspiracy as if it were fact and pointed the finger at the pharmaceutical industry’s alleged hate for his father.

“And they all knew it but kept it from the public on purpose,” Trump Jr. alleged. “Big Pharma hates Trump for taking on the gouging of Americans with drug pricing while offering the same drugs elsewhere in the world for pennies in [sic] the dollar.”

Fox News host Lou Dobbs, a staunch defender of Trump, also voiced the claim that Pfizer had politicized the vaccine, saying it would not have been possible without the president’s guidance.

“President Trump’s Operation Warp Speed Drove the Unprecedented Development of the 90% Effective Pfizer Vaccine in less than 8 months!!!” Dobbs tweeted. “And is it coincidence that the vaccine announcement comes the week AFTER the election!!!”

“HUGE NEWS: Thanks to the public-private partnership forged by President @realDonaldTrump, @pfizer announced its Coronavirus Vaccine trial is EFFECTIVE, preventing infection in 90% of its volunteers.”

It should also be noted that Pfizer actually declined to accept any funding from the U.S. government as part of Trump’s “Operation Warp Speed” effort to rush a vaccine. It does, however, have a pre-purchase agreement with the government.

But the conspiracy falls apart completely due to the simple fact that Pfizer had already stated weeks ago that it wouldn’t have an update on its vaccine trials until “mid-November.”

“Guys, Pfizer said more than a month ago that it would be mid-November before they got results on the vaccine,” @Neoavatara said. “It is… mid-November. They have been open and optimistic all through out. This was not some election ploy.

The conspiracy is ironic given the number of Trump supporters who seemingly not only refute the science of vaccinations but believe that the coronavirus is a “hoax.”

And who also must walk the line of saying Trump still won the election, but that this also may have cost him.

Even with the announcement, Pfizer still has to request emergency authorization for its vaccine from the FDA.