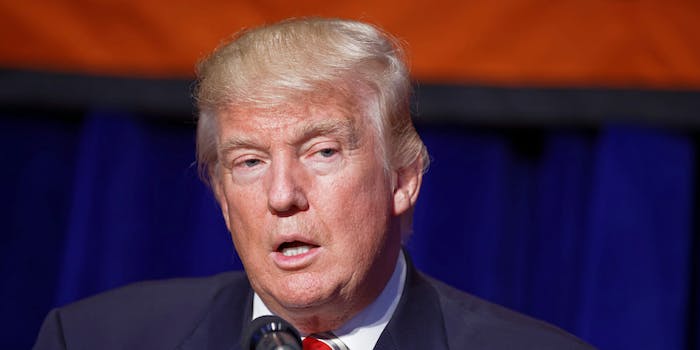 The star has been the subject of quite a bit of vandalism.

A former PETA employee claims he was fired after he poured fake blood onto President Donald Trump‘s Hollywood Walk of Fame star.

Matt Bruce, a former senior campaign specialist for PETA, told TMZ that he was fired after spilling fake blood—which he said was corn syrup and red food —on the star.

“These are scary times to stand up for your convictions,” he said. “It honestly doesn’t surprise me that PETA doesn’t want to the attention of the Trump administration. I think they’re scared. Since Trump is silencing, basically, all of his critics—or at least trying to very hard—I understand why PETA made the decision. But I will never be silent.”

After 8 years I was fired from @peta for pouring blood on @realDonaldTrump star on the Walk of Fame #neverbesilenthttps://t.co/Sn9Fr5seb4

PETA did not immediately respond to a request for comment by the Daily Dot.

The president’s Hollywood Walk of Fame star has been at the center of numerous protests and has been a target for vandalism in the past.

Over the summer, the star was destroyed with a pickaxe, and in late 2016 a man used a sledgehammer to destroy it.

People have also spit on it, taken pictures of them giving it the middle finger, written “don’t vote!” on it and even defecated on it.

You can read all of TMZ’s report here.