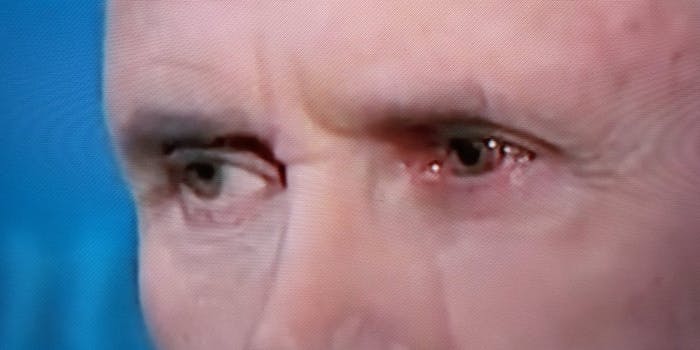 What’s up with Pence’s eye?

Viewers point out pink eye is a possible symptom of COVID-19.

Twitter users were scratching their heads during Wednesday evening’s debate after noticing something strange with Vice President Mike Pence’s eye.

While speaking alongside Sen. Kamala Harris (D-Calif.) at the first and only vice presidential debate, Pence’s left eye caught the internet’s attention after it appeared to be bloodshot.

Some users suggested the issue may have stemmed purely from stress.

Others argued that Pence could have pink eye, a possible symptom of COVID-19.

Numerous users joked that Pence’s eye was merely malfunctioning, proof that the vice president is not human.

“Pence looks like the fake Arnold Schwarzenegger head that cuts its own eye out in The Terminator,” @somebadideas said.

Strangely enough, Biden also dealt with a bloodshot eye in 2019 during a town hall debate.

“Pence decided to pull a Biden and bleed out of his eye,” @zei_squirrel said.

It appears being vice president is bad for your eyes.