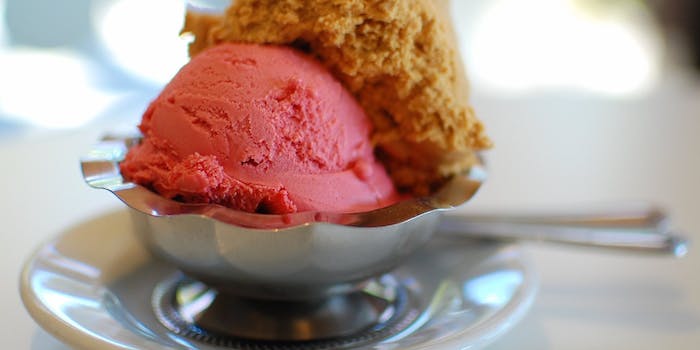 No one seems quite sure who's in on the joke.

In April, if you can remember that far back, House Speaker Nancy Pelosi (D-Calif.) called into The Late Late Show with James Corden from home, at one point revealing a freezer full of ice cream and becoming an instant Twitter meme.

The Trump campaign seized on the moment, releasing an ad juxtaposing the financial strains many Americans have been facing during the pandemic with Pelosi eating ice cream.

Now, three months later, that viral moment spawned a tweet that has confused and delighted both Democrats and Republicans, though, not for the same reasons.

“I am phonebanking and just had five voters in a row say they are gonna vote for Trump because of the ice cream Nancy Pelosi eats. We are so screwed,” Nick Roberts tweeted on Monday.

As Roberts later noted in the replies, the tweet was a joke, not a recap of a real experience. But the majority of responders across the political spectrum seemed to take it quite seriously. Some fellow Democrats encouraged Roberts to keep phone banking, telling him to “keep up the good fight” and “keep the faith.”

Others responded that they shared the same opinions as those described in Roberts’ fictional phone calls.

“I’m barely surviving off of my savings which I’ve now depleted and I have to see Nancy Pelosi laugh in front of her refrigerator that’s more expensive than my car? That’s why I’m voting for Trump,” replied one Twitter user.

“Pelosi wrecked it for me,” added another, sharing a similar sentiment.

The tweet was even shared by some blue-checkmark conservative accounts, including Kyle Kashuv, who shared this “incredible news” twice.

Conservative troll Shashank Tripathi, AKA @ComfortablySmug, quoted the tweet, writing, “WE DID IT MINIONS.”

“Never let anyone tell you trolling doesn’t work. The trolls shall inherit the Earth,” he then added, highlighting some of his old tweets about Pelosi’s ice cream.

Roberts seemed to enjoy the conservative confusion, tweeting “LMAO” along with screenshots of his ice cream joke making the rounds.

However, some in the replies indicated that Roberts’ himself might now be missing the joke, with one user warning that this wasn’t the “dunk” he believed it to be, and another insinuating that he’d tapped into a real conservative concern. In response to one claim that his tweet was “very believable,” Roberts dismissed those who might have taken him for real.

“Was it believable that in the middle of a pandemic with 150,000 deaths that the #1 concern on 5 consecutive people’s minds would be the brands of ice cream that someone who isn’t even running for President eats from months ago?” he responded.

Let’s not tell any of them about Biden’s ice cream bill.