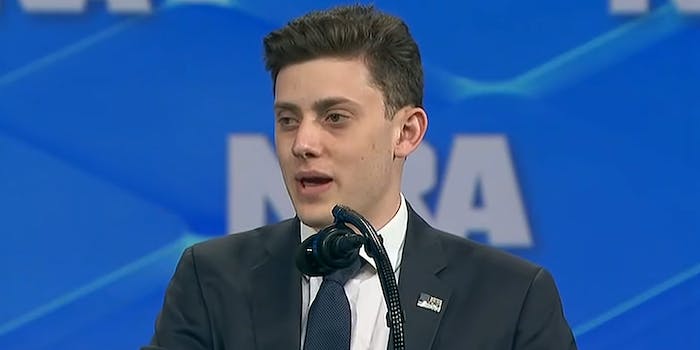 Evidence circulated in the form of an old Google Doc and text message screenshots.

Pro-gun rights Parkland shooting survivor Kyle Kashuv apologized on Thursday for his past use of racist slurs, verifying that the evidence of the old comments circulating online throughout the past week was authentic and written by him.

The evidence of Kashuv’s use of racist and inflammatory language was reportedly released by his former classmates, who threatened to expose him on May 15 in reaction to “hypocritical” tweets he’d published criticising science education personality Bill Nye’s language use.

him projecting this clean image to his followers is so tiring especially because a lot of us knew who he was before / his disgustingly racist/crude remarks he used to make. he was the actual definition of a middle schooler on xbox. the complete 180 he made bc of the fame, wow

The former students teased some of the racist comments that existed in threads below his tweet about Nye.

yup i have those too ! here’s a tease 😌 pic.twitter.com/QCi4Po3TSB

On Thursday, May 16, Kashuv suddenly announced he had stepped down from his role as outreach director at conservative college organization Turning Point USA. His former Parkland classmates, however, kept up the pressure that day by sharing even more of his racist comments.

At this stage, a Google Doc and multiple text message screenshots surfaced. In the document and texts, Kashuv appears to use the N-word dozens of times.

“like im really good at typing n—er ok like practice uhhhhhh makes perfect son??!!” Kashuv allegedly wrote after typing the word over and over.

It wasn’t until May 22, nearly a week later when Huffington Post journalists began asking questions, that Kashuv finally issued a statement via Twitter admitting they were authentic. Kashuv said he was “embarrassed” by the “offensive” and “callous” comments he’d made when he was a 16-year-old “kid.”

In the wake of the mass school shooting at Stoneman Douglas High School, many survivors started a nationwide gun control movement. Kashuv, on the other hand, emerged as one of the few defiantly pro-gun survivors and was quickly embraced by those on the pro-Trump right for his conservative stance.

On the back of his outspoken defense of gun ownership, he appeared multiple times on Fox News, met President Donald Trump, and became heavily involved in right-wing activism.

This was before evidence of past racist slurs appeared. In the wake of it, many prominent conservatives issued their condemnation and disappointment.

Damn those texts were real. @ali

Elsewhere, some stood by Kashuv asking conservatives to forgive him and give him “a second chance.”

We all make mistakes, especially when young, this is not an attempt to make any excuse for @KyleKashuv, his comments were wrong, period. but having watched him over the last year and a half we have seen a boy grow into a man, he deserves a second chance. Prove them wrong, Kyle.

For many Black conservatives, however, the statement was not enough. Right-wing activist Ali Alexander, who worked closely with Kashuv over the past year, dismissed the “non-apology” and communicated his shock.

Young conservative personality CJ Pearson went so far as to lash out at Kashuv in reply.

With all due respect, the comments you made – referring to black athletes as “nigger jocks” – were more than “callous” and “inflammatory”. I appreciate your apology, but please don’t dilute the severity of the words you spoke.

I serve a God of second chances but this isn’t a statement that takes responsibility for the words you spoke.

Being 16 isn’t an excuse to use the n word 50+ times. Just as me – being currently 16 – wouldn’t be an excuse to make anti-Semitic comments.

Disturbingly, however, the backlash came for Pearson. Some users attacked him for being offended, saying it was proof he was just another “another lib in conservative clothing.”

This prompted other well-known social media personalities to defend Pearson.

As for Kashuv, his future within the conservative movement will be a test for what it chooses to excuse. Judging by the backlash to Pearson, don’t be surprised if he continues on his upward career trajectory.