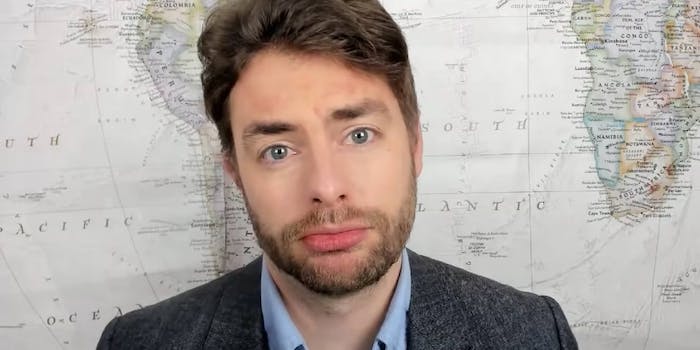 Watson says he was blocked for being more popular and 'definitely more attractive.'

InfoWars editor and YouTuber Paul Joseph Watson is tweet-storming after noticing he was blocked on Twitter by Piers Morgan, a controversial TV personality and host of Good Morning Britain.

Twitter users seemed to welcome the Sunday morning drama. Within hours, Paul Joseph Watson was a trending search term. Twitter user and fellow YouTuber @DavidJBradley1 even called it the highlight of his quarantine so far.

In Watson’s initial tweets, which include a screenshot showing Morgan blocked Watson, the YouTuber says he was blocked by Morgan because he’d become more popular than him and “definitely more attractive.”

Watson takes to name-calling the journalist and says his “entire career is based around pretending to be annoyed by anything, including vegan fucking sausage rolls.”

Watson continues to insult Morgan in a series of tweets.

Content producer @Mike_P_Williams, who is ironically blocked by Watson on Twitter, called Watson’s tweets an “epic (but concerning) meltdown.”

Others reactions on the platform are a mixed bag.

In his only tweet about the situation, Morgan called Watson “a repulsive, racist, far-right, Muslim-hating, conspiracy theorist imbecile” and said he welcomes the YouTuber’s disapproval.