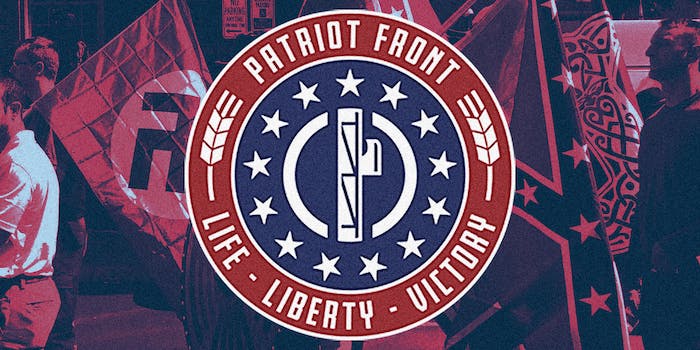 The annual march on the anniversary of Poland’s Independence Day has become one of the largest gatherings of racists in the world. In recent years, the U.S.-based white nationalist Patriot Front has been among the ranks of the neo-Nazis and fascists who participate in the march.

A man who claims to have infiltrated Patriot Front from 2018-2020 provided the Daily Dot with a document recapping a trip it took to Europe. The document discusses networking with extremists in Poland, Germany, Latvia, Italy, and Sweden. In it, it mentions fundraising strategies the group learned, notes nights spent barhopping, and highlights ways the group can adopt European models for fascism.

A report by the Anti-Defamation League confirms a trip took place in 2019, showing Patriot Front marching in Poland with European fascist parties.

The Daily Dot is the first to report on the document recapping it, provided to the Daily Dot by a source who infiltrated Patriot Front. Little was previously known about this trip. There appears to be scant mention of it in the hacked materials recently published by the left-wing media collective Unicorn Riot. In a telephone conversation last month, the man who says he infiltrated the group told the Daily Dot that upon their return Patriot Front attempted to scrub its chats about their travels because Homeland Security questioned a top leader about the trip.

The 10-page document describes the activities and groups Patriot Front connected with on each leg of the trip. The groups include the National Independence in Poland; CasaPound and Forza Nuova in Italy; Verrogs in Latvia; Nordic Resistance Movement in Sweden; and affiliates Junge Nationalisten and National Democratic Party of Germany.

The document is called “Reflections on Nationalist Organizations in Europe. What we can learn, what we can bring back, and what should be pursued.” It analyzes each group’s network, infrastructure, and finances, with discussions about which it could implement.

The point of the journey seems to have been less about forging close transatlantic alliances than figuring out how to be more successful as a group—with some partying, sightseeing, and fostering hate mixed in. Patriot Front visited tourist destinations such as the Vatican, ate regional cuisine, and was served a traditional Swedish Christmas feast by members of the neo-Nazi Nordic Resistance Movement. According to the document, Patriot Front also participated in marches, distributed flyers, plastered stickers, and performed unknown “activism” throughout Europe. According to the document, a member of Junge Nationalisten gave the group Nazi paraphernalia as a gift.

In additional leaked chats, the group shared images of their stickers plastered across Rome.

But barhopping in Latvia was also apparently a highlight, as it was twice referenced in the document.

The hospitality of each group was critiqued after the trip.

Figuring out a source of funds appears to have been the main focus, as the document takes particular care detailing the fundraising activities of each group and whether Patriot Front could possibly implement the same. At the time, it rejected the idea of charging dues, but seemed quite keen on opening a business, like several of the groups it visited.

“Customer-facing/retail businesses are definitely a way forward, however those who work at these establishments should be prepared to be doxxed if the establishment gets discovered by our adversaries,” it says. “I believe that non-retail and eCommerce businesses would be the way forward should PF decide to go down this route.”

Of a visit to a traditional German bakery, it says, “Great business idea, put it in retirement communities and it would be fireeeee.”

The National Independence Day March was the highlight of the trip, according to Billy, the antifascist who says he infiltrated Patriot Front and provided material to the Daily Dot. Billy said he joined them while they were in Poland.

“It’s not an explicitly fascist thing,” said Billy [who was granted a pseudonym by the Daily Dot] of the march. “…[But] it does kind of have this darker parallel experience.”

Billy said that he fed members of the media and antifascist groups information about Patriot Front for about two years before the white supremacist organization abruptly revoked his credentials on their private chats. He assumes they figured out he was the source of several leaks that were reported from 2018 to 2020, when he says he was embedded in the group.

Some of the leaked materials include chat logs from November 2019, the time of the European trip, which were published by the Torch Antifascist Network. In the chats, members discuss their activities and refer to the same European groups from the document recapping the trip.

A comment timestamped Nov. 24, 2019 approvingly referred to an article in Nordfront, a Swedish language website then run by the Nordic Resistance Movement. An article posted on the site that day referenced activities Patriot Front mentioned in its recap of the trip, including eating a traditional Swedish Christmas meal and handing out fliers at a fair in Gothenburg, Sweden.

The march in Poland is organized by the fascist National Radical Camp (ONR). Reuters reports that tens of thousands participated in ONR’s 2019 march, making it among the largest far-right gatherings in the world. Billy said that this was at least Patriot Front’s second time participating. In its document recapping the trip, Patriot Front wrote that it interacted with nationalists from Spain, Austria, and Germany at the march.

While Billy said he was only there for the Polish leg of the trip, he also attended a post-trip meeting about their journey. He said that Patriot Front was deeply impressed by the Europeans.

“In many ways the far-right groups in Europe are more established. I think Patriot Front was kind of in awe,” he said.

“They can barely put together a flash mob demonstration,” Billy added.

He said that they were “agog” over CasaPound Italia’s compound. The document reflects that.

“Walking through the complex is a religious experience like no other,” it says. “In terms of brand value it is one of CasaPound’s most valuable assets.”

CasaPound is a far-right group that also embraces fascism. Its compound is a state-owned building it’s occupied since 2003 under a legal mechanism similar to adverse possession, the Washington Post reports.

While Patriot Front lavished praise on the European groups, it was unsparing in its criticisms, particularly of CasaPound and fellow Italian group Forza Nuova. It opined that their businesses are unsustainable, and described the latter’s hospitality as disappointing.

It also described the two as operating like gangs and wrote disapprovingly of CasaPound’s approach to violence.

“One line that stuck out was, ‘Casapound is not an organization that participates in violence, but we are not a non-violent organization.’ Patriot Front cannot adopt this mentality if we expect to last,” the document states.

“Operating as a gang cannot be in our strategy moving forward, not only is it not necessary, it opens the organization and its members up to significant risk.”

“The last thing this organization needs to become is a meat-grinder for its members.”

It added that CasaPound takes unnecessary risks, such as the 2013 storming of a European Union building that resulted in arrests and injuries to several members. (Fear of arrest is a pervasive feature of Patriot Front.)

It also criticized CasaPound for not using encrypted communications or other operational security.

Rivalries and feuds are common amongst far-right groups. Its European tour gave Patriot Front a glimmer of hope of setting aside its differences with other groups, even temporarily, to come together for a common cause.

“ONR’s willingness to entertain and work with other nationalist groups for their march also shows that we don’t have to hate each other,” it wrote.

It doesn’t appear they’ve had much success on this front—but they may not mind this overly much.

“It’s not like they’re focused on building international bridges,” Billy said. “… Maybe on some level they just wanted to take a trip to Europe and do some sightseeing.”