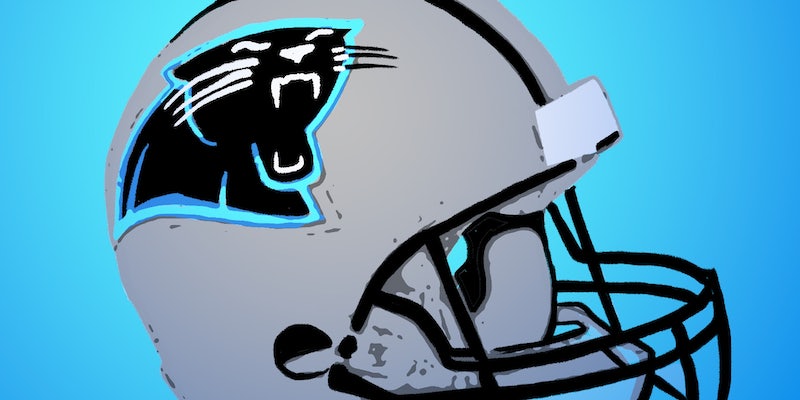 A defensive player will have a 3D-printed brace.

When the Carolina Panthers defense takes the field on Super Bowl Sunday against Peyton Manning and the Denver Broncos, the first-ever 3D-printed equipment will likely make its NFL debut.

Panthers linebacker Thomas Davis will be wearing a customized 3D-printed brace, cradling the injury he suffered in the first half of the NFC title game against the Arizona Cardinals on January 24.

The All-Pro linebacker, who has been with the Panthers for 11 years, fractured his right forearm in the game. Despite his injury, he’s expected to start in the Super Bowl on Sunday, February 7.

Davis now has a metal plate and a dozen screws in his right arm. The linebacker isn’t a stranger to injuries, or playing through them, though. According to the Charlotte Observer, Davis is the first NFL player to overcome three ACL surgeries. “I shouldn’t have any issues with the stitches coming loose. But if they do we’ll just stitch it back up,” he told the paper.

The linebacker had the option to test and choose from four different braces, but has worn the 3D-printed equipment in practice all week because it performed the best in practices leading up to this week’s game.

Utah-based engineering and 3D printing firm WhiteClouds worked with 3DElite to design and print the brace based off of a 3D scan of Davis’s arm received on January 27. The team took eight hours to engineer the brace to fit Davis’s exact biology. It took 30 hours to print, and was shipped to the team immediately.

Jerry Ropelato, CEO of WhiteClouds, told the Daily Dot that normally this project would’ve taken two to three weeks. There was no time to prototype, and they had no baseline to work from.

The brace is made from plastic and rubber materials, with a spongey interior that absorbs shock—crucial for an injured linebacker who will be making hits against the Bronco’s offensive line of 300-pound men. It’s extremely lightweight, only about two to three times the weight of a neoprene brace that you might wear if you sprain an ankle.

“Typically braces are more for strength, and what we’re trying to accomplish with this design is more of a shock absorption,” Ropelato said. “It had to be extremely lightweight and have the breathability. We also had to protect his incisions from his surgery. The shock absorption was the tough part.”

You probably won’t be able to see the brace while viewing the game from your couch. It will be taped to match the Panthers’s colors, hiding the “bionic” tech.

Though this is the first appearance of 3D-printed equipment in the NFL, Ropelato predicts it certainly won’t be the last. He says that personalization through 3D printing, especially in the sports arena where athletes are frequently injured, will be a huge market for the technology.