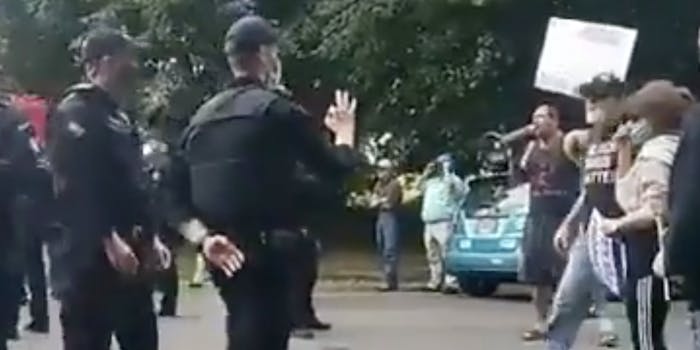 Did this Oregon cop flash a white power sign?

Oregon State Police conducted an investigation and released their findings the following day.

A law enforcement officer in Oregon has been accused of flashing a white power sign during a protest on Saturday.

As Black Lives Matter demonstrators and counterprotesters faced off at the state’s capital on July 4, an Oregon State Police (OSP) trooper was filmed using the “OK” hand signal often associated with far-right groups.

“Tell me again how defund the police is wrong when no one even bats an eye at a policeman in Oregon flashing a white power sign at a Proud Boy that he’s obviously chummy with,” Twitter user @MsLisaHendricks said.

The hand sign was first linked to white supremacy as part of a prank on the infamous imageboard 4chan. The symbol was eventually designated a hate symbol by the Anti-Defamation League (ADL) after being used repeatedly by white supremacist groups.

The OSP launched an investigation soon after into the viral clip, which has been seen more than 3.7 million times on Twitter alone.

In a response across its social media profiles, the OSP denied the officer’s actions were in any way tied to white supremacy.

Body camera footage released by the OSP shows that prior to the trooper using the hand signal, a man wearing a “Black Bikes Matter” T-shirt had been shoved to the ground by a protester.

Once the man got back on his feet, the officer approached, as seen in the footage originally posted to Twitter. The Oregon State Police claim that the trooper used the OK hand signal to determine whether the man had been injured.

“Best available evidence indicates the trooper was simply checking on the man’s status and used the universal signal to signify this inquiry, which the man gestured he was—then patted this trooper and a second trooper on their shoulders in an apparent signal of appreciation,” the OSP said. “The man was the victim of a crime.”

But the explanation isn’t sitting well with everyone. A petition has since been launched by the group “Salem Community Organizers” demanding a lengthier investigation.

“The investigation that they claim to have made was done in less than 18 hours,” the petition states. “The response was as predictable as it was ludicrous, that the trooper was asking the agitator in the ‘Black Bikes Matter’ T-shirt that he was okay using a hand sign known to be used to signal allegiance among racist circles strains all credulity.”

The OSP has argued that its accusers failed to wait for “complete information before condemning a trooper with an irreparable and harmful label.”