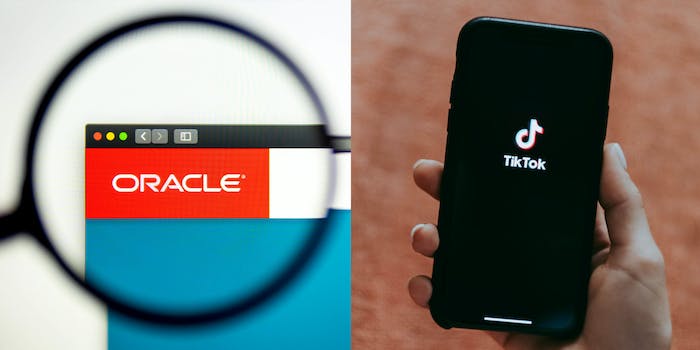 Oracle has some history with the intelligence community.

Oracle, the enterprise tech giant, has reportedly joined the list of potential suitors looking to buy the U.S. operations of TikTok amid a looming ban of the popular app.

The Financial Times and CNBC first reported that Oracle was interested in acquiring TikTok. Oracle joins Microsoft, believed to be the frontrunner, and Twitter as companies that are seeking a deal.

President Donald Trump set in motion a possible sale by signing an executive order earlier this month that would effectively ban TikTok in the U.S. unless it is sold to a company based stateside.

The concerns are purportedly about data privacy and the possibility of the Chinese government getting its hands on U.S. user data. TikTok is owned by ByteDance, a Chinese company.

TikTok has long defended itself against such claims, saying that U.S. user data is stored in the U.S. and it would not agree to send over U.S. data to the Chinese government. It recently set up a web portal to refute such accusations.

However, much like other tech giants eyeing TikTok, Oracle has its own cozy relationship with the U.S. government, as Gizmodo pointed out today.

Similar criticisms have come up against Microsoft, which has helped build a large surveillance apparatus for the NYPD and has partnerships with police surveillance vendors.

Oracle CEO Larry Ellison—who is a supporter of Trump—called the NSA spying unveiled by whistleblower Edward Snowden “essential” in a 2013 interview.

Also, as Reuters noted, Ellison was contracted by the CIA to design a database with the code name Oracle, which would eventually become the name of his company.

Meanwhile, on its website, Oracle highlights its “long-standing strategic technology” partnerships with the U.S. government, including the Department of Defense and intelligence communities.

Essentially, the two large tech giants eyeing TikTok both have strong ties to the government, which is basically the same argument for it being taken away from a Chinese company.