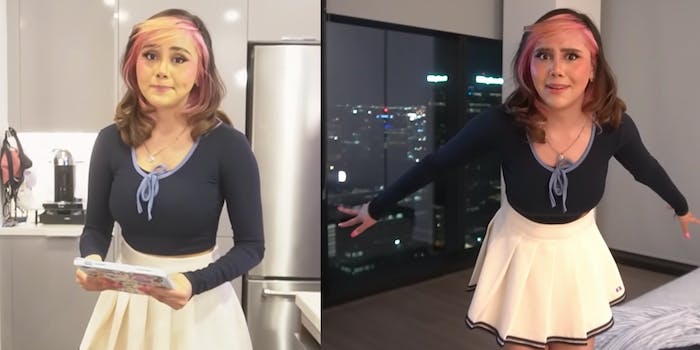 ‘Went from criticizing Rich Boomers to becoming a Rich Boomer’: Influencer from ‘OK Boomer’ TikTok criticized after showing off her $2 million apartment

A popular TikTok user sparked backlash online after showing off her $2 million apartment.

Nicole Sanchez, known on the platform as “Neekolul,” made waves last year after wearing a T-shirt from Sen. Bernie Sanders (I-Vt.) while singing a song commonly referred to as “OK Boomer.”

Sanchez, who’s also known for wearing a sweatshirt from Rep. Alexandria Ocasio-Cortez (D-N.Y.) that includes the text “tax the rich,” has since racked up more than 700,000 followers.

But the TikTok user is now being accused of hypocrisy after many of her followers claimed that she was bragging about her wealth.

In a video uploaded to YouTube on Tuesday, Sanchez gave her viewers a “$2,000,000 Apartment Tour.”

Viewers, however, weren’t impressed by Sanchez’s apartment or its “East Wing” gaming room.

The video was quickly inundated with negative comments and ultimately received more than four times as many downvotes as upvotes.

“The OK Boomer girl went from criticizing Rich Boomers to becoming a Rich Boomer,” one user wrote on YouTube.

Others argued that Sanchez’s views on wealth almost certainly changed after the money started rolling in.

“Well. Wasn’t she the same girl that said ‘tax the rich’ but getting a 2 mil apt. Irony,” another user said. “And moved to Dallas from cali to avoid taxes. Weird.”

It turns out that Sanchez attempted to defend her wealth in a video last March in which she argued that the rich were billionaires, not millionaires.

“I think when people mean like, ‘Tax the rich,’ I think at the end of the day they do mean, like, billionaires and people who have insane, unfathomable amounts of wealth,” she said.

Sanchez also went on to push back against comments she deemed rude in relation to her finances.

Despite the backlash, Sanchez continues to put out regular content to her significant following on all of her social media profiles.

The Daily Dot has reached out to Sanchez.