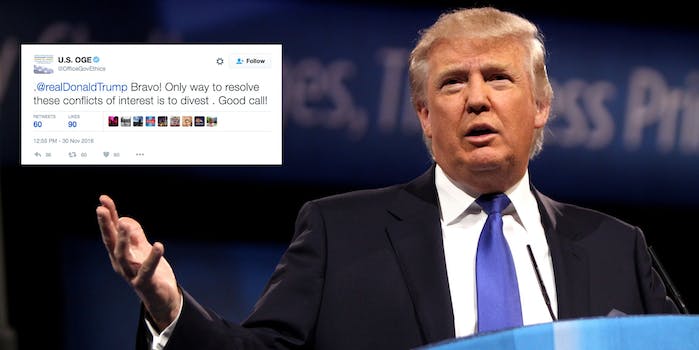 Is the Office of Government Ethics praising Trump—or mocking him?

Strange tweets are afoot at the OGE.

What the heck is going on at the Office of Government Ethics?

On Wednesday afternoon, the OGE tweeted out a series of messages directed to President-elect Donald Trump regarding his recent decision to “fully” cut ties with his business empire ahead of his inauguration in January.

The tweets, which praise Trump for his “divesture” from his businesses—a move Trump has not publicly said he would do—are a stark departure in tone and substance for the @OfficeGovEthics account, which primarily tweets serious, boring things like this:

Learn more about the state of each federal agency’s #ethics program with our summary report. https://t.co/Ad3VNftK2C

And here are the tweets praising Trump:

.@realDonaldTrump We can't repeat enough how good this total divestiture will be

.@realDonaldTrump OGE is delighted that you've decided to divest your businesses. Right decision!

.@realDonaldTrump – we told your counsel we'd sing your praises if you divested, we meant it.

The use of “Bravo!” and “Good call!” throughout these tweets appears to mock Trump’s signature “Sad!” that so often punctuates his tweets. But, honestly, who knows if that’s intentional or just a meaningless detail.

In a statement provided to the media, an OGE spokesperson stood by the tweets and clarified that the agency was responding with excitement only to Trump’s public statements regarding his plan to avoid conflicts of interest.

Like everyone else, we were excited this morning to read the president-elect’s Twitter feed indicating that he wants to be free of conflicts of interest. OGE applauds that goal, which is consistent with an opinion OGE issued in 1983. Divesture resolves conflicts of interest in a way that transferring control does not. We don’t know the details of their plan, but we are willing and eager to help them with it.

Trump plans to formally announce the details of how he plans to sever business ties with himself—a move government ethics experts say is imperative for him to govern properly—during a press conference on Dec. 15.

Until then, we’ll just have to keep an eye on the OGE account to see what else pops up.