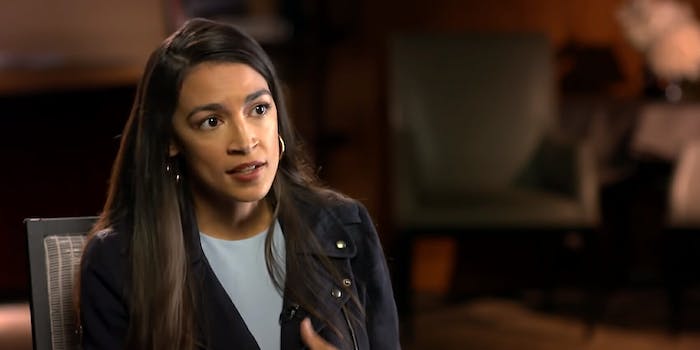 She made the remarks during a '60 Minutes' interview.

Rep. Alexandria Ocasio-Cortez (D-N.Y.) said in an interview that aired Sunday that there is “no question” President Donald Trump is a racist, citing his response to the white supremacists in Charlottesville, Virginia.

The newly-sworn in representative made the remarks during an interview with 60 Minutes. When asked why she does not talk about the president much, she called him a “symptom of a problem” and said he has “given a voice” to racism.

CNN’s Anderson Cooper, who was interviewing Ocasio-Cortez, asked her whether she thought the president was a racist, to which she answered: “no question.”

“When you look at the words that he uses, which are historic dog whistles of white supremacy. When you look at how he reacted to the Charlottesville incident, where neo-Nazis murdered a woman, versus how he manufactures crises like immigrants seeking legal refuge on our borders, it’s—it’s night and day.”

Online, the line of questioning by Cooper became a popular meme.

In a statement to 60 Minutes, the White House pushed back against the representative’s remarks.

“Cong. Ocasio-Cortez’s sheer ignorance on the matter can’t cover the fact that President Trump supported and passed historic criminal justice reform… and … has repeatedly condemned racism and bigotry in all forms.”

The president was criticized for his response to the incident in Charlottesville in 2017 when he said “very fine people” were on both sides of a rally where protesters clashed with white supremacists and one woman was murdered.