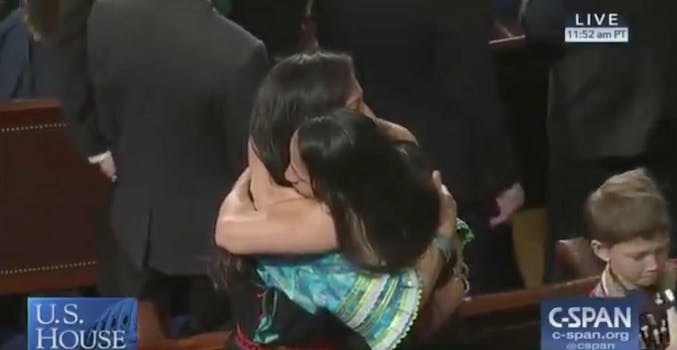 Yesterday marked a historical day in the American politics, with women from various backgrounds becoming “firsts” to step into Congress: the first former refugee, first Native American women, the first Palestinian American, among others.

Twitter had numerous hashtags and reactions for each of the candidates; one video in particular that went viral is the embrace of Rep. Deb Haaland (D-New Mexico) and Rep. Sharice Davids (D-Kansas) hugging each other as they were sworn in.

It’s only a few seconds long, and can look like an ordinary emotional moment, but we all know it’s not. Native American women’s representation in Congress has been long overdue, and both Haaland and Davids are answering a wait two centuries in the making.

"The first two Native women are finally sworn in Congress."

God, look at their strength.
You can see it in their shoulders, in their tears, in the way they hold each other.

We are still here.
We've always been here.
We will not be ignored or forgotten. https://t.co/74Y5no7nnB

So much pain and heartache in this embrace. And so much joy and beauty as well. Such a powerful moment.

That's what America is all about. https://t.co/BXuLAp8wUa

This literally made my skin tingle with joy. May they thrive the hell out of that place. https://t.co/mYU3Eg0UTU

The best part, however, is when, after their embrace, Haaland voluntarily takes Davids’ scarf to wipe her own tears. At the very least, it’s a symbol of sisterhood; beyond that, it signifies the unity between the women, the comfort of using each other to wipe your own tears (seriously, how many people do we feel that level of connection with?).

My scarf is your scarf. Today’s history is our history. So grateful to be a part of this moment – this movement – with you, @RepDebHaaland. https://t.co/m6gaWQhrZ1

It's for tears and they are family 😉

Just know, if you’re ugly-crying over this moment, you’re not alone.