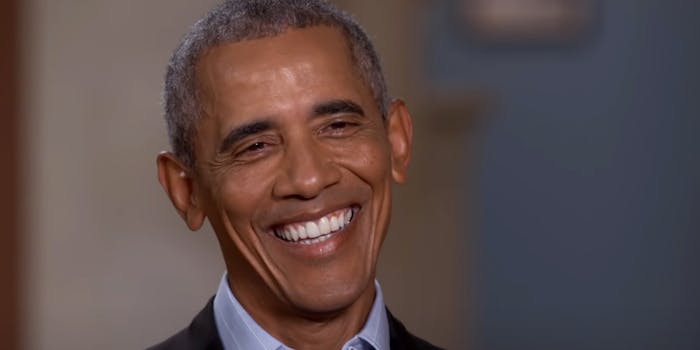 Obama’s ‘A Promised Land’ playlist is a perfect meme template

'Music has always played an important role in my life—and that was especially true during my presidency.'

Former President Barack Obama just released the first of two volumes of his new memoir, A Promised Land, which details his early life and first term as president.

Volume One runs 768 pages, but he still came with much more to talk about, dropping a music playlist for the book. Playlists aren’t uncommon for Obama or his wife Michelle, but this new list represents something more broad and unique.

For the book release, he compiled songs that were “memorable” from his administration.

In a tweet, Obama described his A Promised Land playlist: “Music has always played an important role in my life—and that was especially true during my presidency. In honor of my book hitting shelves tomorrow, I put together this playlist featuring some memorable songs from my administration. Hope you enjoy it.”

The diverse list is being critiqued in all directions, but was mostly memed, with people subtly and drastically switching out songs.

Anil Dash was disappointed the playlist didn’t have any selections from Prince’s legendary discography.

It was also time to bring back Obama’s live musical exploits.

Some detractors are killing the list out of some weird, self-righteous taste policing.

Given the popularity of Obama’s A Promised Land list, you can almost guarantee another playlist is coming with the second volume.