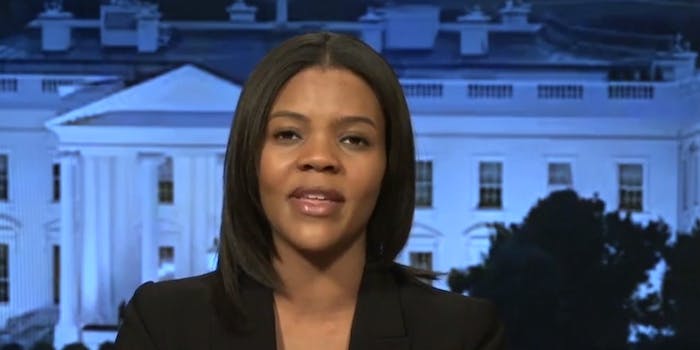 On Fox News, Owens claimed Obama couldn't have won if racism was still a big deal.

The right wing is still early in the mourning process over President Donald Trump’s loss to President-elect Joe Biden. While many, like Trump, remain in denial, conservative pundit Candace Owens has apparently moved on to anger, which makes sense, as outrage is one of her defaults. (Praising Hitler is another.)

In back-to-back appearances on Fox News, first on Sean Hannity’s show on Thursday night, then on Fox & Friends Friday morning, Owens seethed about former President Barack Obama’s upcoming memoir, A Promised Land, in which he posits that his presidency ignited a racist backlash that Trump rode all the way into the White House.

She called Obama’s comments “unfathomable,” “backwards,” and “wrong,” and said he was “making history in the wrong kind of way.” Then she accused the two-term president of hating the country he led.

“He will be the first president in the history of America who ever left office and held such hatred and hostility for the country and the people that gave him everything.”

Owens also claimed that Obama wouldn’t have been elected if racism was still a thing.

And besides, she continued, instead of complaining about racism, the man whose successor spent years pushing a racist conspiracy theory about his birthplace should be thanking white people.

Owens also argued that “America is not a racist country” and said Obama “should show some respect and show some dignity.”

Her fans loved it.

By and large, however, most simply ignored her remarks, which came off as disingenuous and scripted.

As anyone who’s read even an excerpt of Obama’s book can attest, Owens’ characterization of his patriotism is way off the mark.

In his book, Obama writes, “What I can say for certain is that I’m not yet ready to abandon the possibility of America—not just for the sake of future generations of Americans but for all of humankind.”