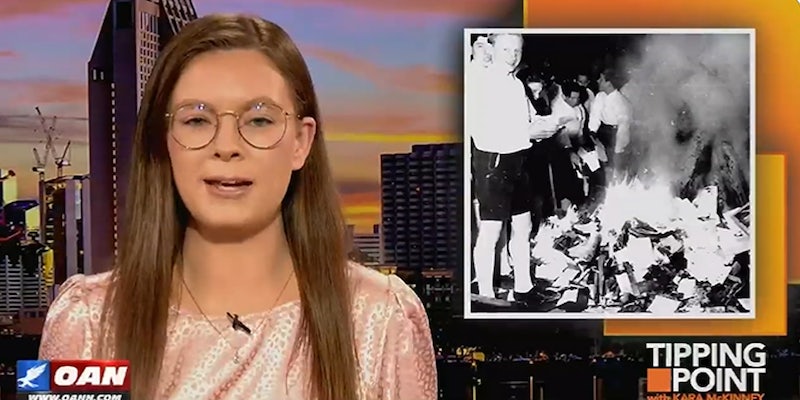 Maybe not the comparison you want.

A host on the far-right One America News Network (OAN) used a photo of Nazis burning books in a segment justifying banning books from schools. She also referenced a quote that’s widely credited to a Nazi propagandist.

“I think banning pornographic books from schools is not only justifiable but the only moral option,” she said. “It’s our duty to purge our schools of such filth.”

While McKinney says she is in favor of banning “pornographic” books, the justification is often just a euphemism used on the right for any material having to do with LGBTQ identity. She was responding to a post by Randi Weingarten, president of one of America’s biggest teacher unions, who shared a list of books she claimed Florida was banning that turned out to be false.

Weingarten retracted her tweet, but McKinney somehow took it to mean that Weingarten and liberals were in favor of banning books.

Emma Mae Weber, a media analyst for Media Matters for America, pointed out that the image McKinney used to drive home her point about banning books was of Hitler Youth burning books in 1938.

“McKinney is using a photo of Nazi youth partaking in a book burning to argue that banning LGBTQ books in public schools is good,” Weber tweeted.

Others piled on McKinney and OAN in the comments.

“Next on OAN: were Nazis the good guys and was World War 2 the start of modern day cancel culture and wokeism?” wrote one.

According to the American Library Association, last year, five of the top 10 most challenged books were targeted based on their LGBTQ content.

“Book bans, while not a new phenomenon, have gained momentum in recent years,” according to U.S. News & World Report. “Censorship attempts have most recently targeted books that include LGBTQ characters or address issues of race and racism.”

The left’s attempts to blame conservatives for book bans, McKinney claimed, is an example of “Saul Alinsky’s Rules for Radicals‘ tactic of accusing your political opponent of what you’re doing yourself so that you can hide in plain sight.”

McKinney, who describes herself on Twitter as a “history buff,” insisted without evidence that it’s liberals who want to ban books. But a recent Washington Examiner poll showed that conservatives are far more likely to support censoring books from schools.

The quote has been attributed to many historical figures over the years, including Alinsky, Vladimir Lenin, and Karl Marx. It’s actually most likely a paraphrased version of a quote from a 1934 speech by Nazi propagandist Joseph Goebbels.

Calvin University reports that Goebbels said, “The cleverest trick used in propaganda against Germany during the war was to accuse Germany of what our enemies themselves were doing.”