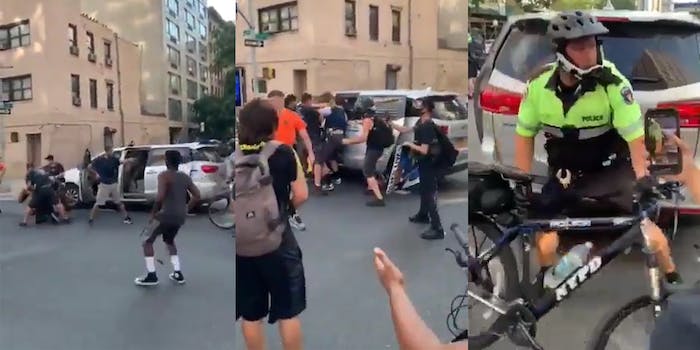 'There is no excuse for snatching women off the street and throwing them into unmarked vans.'

The footage, uploaded by journalist Michelle Lhooq and viewed more than 8 million times, shows several officers wearing T-shirts and shorts swarming a woman whom the Washington Post identified as 18-year-old Nikki Stone. The cops drag Stone into an unmarked minivan as one of them screams and lashes out against the crowd of protesters who gather in the intersection on foot and on bicycle.

In a statement released on Twitter Tuesday night, the NYPD confirmed that officers put Stone in an unmarked van, and that she was “wanted for damaging police cameras during 5 separate criminal incidents in & around City Hall Park.”

“When officers from the Warrant Squad took the woman into custody in a gray NYPD minivan this evening, they were assaulted with rocks and bottles,” the statement continues. “When she was placed into the Warrant Squad’s unmarked gray minivan, it was behind a cordon of NYPD bicycle cops in bright yellow and blue uniform shirts there to help effect the arrest.”

Several people refuted the NYPD’s version of the events in the replies.

“You do realize this is a public video right????” @emills28 tweeted. “She has been abducted into the unmarked vehicle by men in plain clothes before any bike cops show up!”

Several people who were at the scene of the arrest also disputed the NYPD’s statement, including 20-year-old Oxford student Clara Kraebber.

“None of that happened whatsoever,” Kraebber told Gothamist. “We literally turned the corner and were met with a line of police who attacked us without warning.”

Many Twitter users referred to Stone’s apprehension as a kidnapping and demanded to know where she went, causing the hashtag #whereisnikki to go viral.

“An 18-year-old trans girl who organized a peaceful protest was just kidnapped by NYPD officers in an unmarked van,” @metasynthie tweeted. “She’s allegedly suspected of… wait for it… putting stickers on police cameras? #whereisnikki, @NYCMayor? We demand her immediate release.”

“Our civil liberties are on brink,” Ocasio-Cortez wrote. “This is not a drill. There is no excuse for snatching women off the street and throwing them into unmarked vans. To not protect our rights is to give them away. It is our responsibility to resist authoritarianism.”

Local news organizations are reporting that Stone was released over the night.