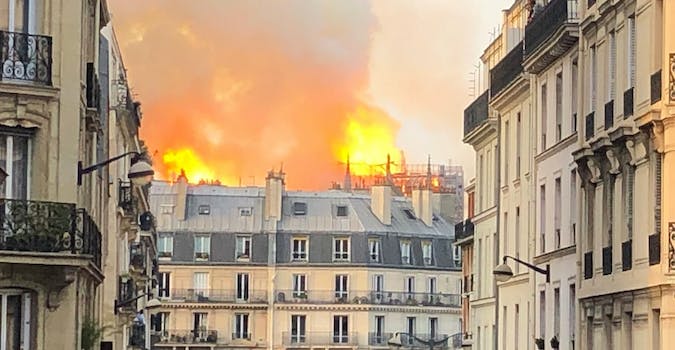 Everyone has a theory, but no one has evidence.

The massive fire at Notre Dame Cathedral in Paris has shocked the world, as one of the landmarks of Western architecture seems on the verge of destruction. It’s also the perfect catalyst for conspiracy theories.

As of this writing, the cause of the fire isn’t known, with officials in Paris saying only that it wasn’t set deliberately and might be linked to the large-scale renovations happening there. But InfoWars’ No. 2 man, Paul Joseph Watson, already claims to have insider information from “a worker” that the fire was set deliberately.

The famous Notre Dame cathedral in Paris is on fire, with one worker claiming that the blaze was deliberately set.

Media reports say the fire is linked to "renovation" work.https://t.co/r9GrIRCVNt#NotreDame

This “worker” not having a name or any evidence of existence doesn’t matter to Watson’s 943,000 followers, who shared it thousands of times.

The source from whom Watson took his information already deleted the tweet where he mentioned the “worker.”

Reports the "worker who said it was deliberate" are actually on right wing fake news sights, based on a deleted tweet from journalist and written up by white supremacist and Alex Jones employee Paul Joseph Watson. https://t.co/lTAg6OjLyA pic.twitter.com/neHJhSAcBT

How a baseless, unsourced claim from a blue checkmark helps fuel QAnon disinformation on Twitter in a single step. pic.twitter.com/aBRM7eMEak

But one of the shares came from Mike Cernovich, who jumped on it by tweeting out a series of stories about other recent church vandalism in Paris, a spate of small-scale attacks that haven’t had anywhere near the impact of the Notre Dame fire.

He had nothing to offer as evidence for the cause—but jumped on a livestream for his 460,000 followers anyway.

It wasn’t just the hardcore conspiracy theorists who “knew” what “really happened” despite nobody knowing what happened.

Canadian white nationalist “philosopher” Stefan Molyneux told his nearly 400,000 followers that “we all know what’s really happening” in Paris and followed it up with a stream of tweets and retweets. He declared that the “official story” must be a cover-up and that it’s simply not possible for there to be a construction fire of this magnitude.

We all know what is happening.

Over and over, without any evidence thus far, professional conspiracy theorists and enthusiastic amateurs alike pumped out a stream of misinformation and blamed Islam in general for the fire.

These theories will likely launch countless YouTube videos and Facebook posts, gumming up these platforms, as well. The theorists’ reasoning, the same flawed logic they always use, is that nothing happens “by accident” and that there are no coincidences. If a major event takes place, the conspiracy theories suggest it must be guided by the unseen hand of someone, be it a ruling cabal or organized terrorism.

A search on Twitter for “Notre Dame Islam” finds thousands and thousands of tweets declaring that the fire must be an act of terror.

Twitter had it even more problems with misinformation. A fake CNN account began tweeting about the blaze being deliberately set.

Even Fox News had to fight against the tide of misinformation. Host Shepard Smith ended an interview with a French official who speculated about an arson attempt, calling it France’s “9/11.”

“So, of course, you will hear the story of the political correctness which will tell you it’s probably an accident, but I don’t think—” said PhilippeKarsenty, the deputy mayor of Neuilly-sur-Seine, before being cut off by Smith.

“Sir, sir, we’re not going to speculate of the cause of something that we don’t know,” Smith said.

Finally, nobody revels in the opposite of scientific research like QAnon believers, who came to the Paris fire ready with a host of alternate explanations. Some QAnon theories dovetailed with those of people like Watson and Cernovich, and others went to truly unique places.

Notre Dame is burning to the ground. But don't worry, QAnon has already cracked it wide open as a deep state/Michelle Obama/Macron false flag distraction from child sacrifice and Brexit.

As if it could be anything else. pic.twitter.com/2a5a3LHJ3X

These are idiotic, but also the secret language of a violent movement. pic.twitter.com/2hTRm92vnO

Though unproven, these theories will likely work their way to the larger QAnon decoder accounts and further up to the biggest fish in the conservative conspiracy theory ecosystem.

Meanwhile, no official cause has been given for the fire, which rages on while the world watches in horror.