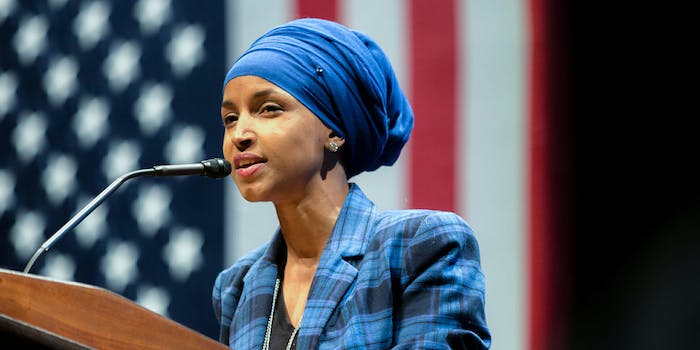 Omar released a statement about the video on Sunday night.

Rep. Ilhan Omar (D-Minn.) said on Sunday night that she has an “increase in direct threats on my life” after President Donald Trump tweeted a video that had remarks she made interspersed with images from the Sept. 11 terrorist attacks.

The president tweeted the video on Friday evening last week, captioning it with “WE WILL NEVER FORGET!,” spliced with a portion of Omar’s remarks made to the Council on American-Islamic Relations (CAIR), which have been criticized as being insensitive.

In her statement, the Minnesota representative said “acts of hate” by “right wing extremists and white nationalists” are on the rise in the United States, adding that “Counties that hosted a 2016 Trump rally saw a 226 percent increase in hate crimes in the months following the rally.”

“Violent rhetoric and all forms of hate speech have no place in our society, much less from our country’s Commander in Chief,” her statement reads. “We are all Americans. This is endangering lives. It has to stop.”

We are all Americans. This is endangering lives. It has to stop. pic.twitter.com/gwB2kDUIRp

“The president’s words weigh a ton, and his hateful and inflammatory rhetoric creates real danger,” Pelosi said in her statement. “President Trump must take down his disrespectful and dangerous video.”

The president has not taken down the video.

Numerous Democrats have come to Omar’s defense in the wake of Trump’s video including Rep. Alexandria Ocasio-Cortez (D-N.Y.), Sen. Bernie Sanders (I-Vt.), and Sen. Elizabeth Warren (D-Mass.), among others.