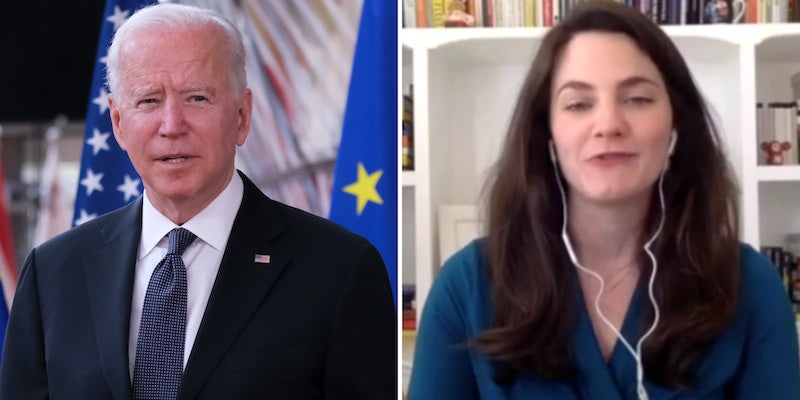 President Joe Biden announced a new Disinformation Governance Board on Wednesday, and its executive director is already in hot water, especially from those on the right.

Nina Jankowicz, who has previously advised the Ukrainian government and authored the book How To Lose the Information War: Russia, Fake News, and the Future of Conflict, was tapped to lead the new board, which operates under the Department of Homeland Security. However, conservatives are already up in arms over previous statements Jankowicz made regarding a viral story about a laptop allegedly belonging to Hunter Biden, President Joe Biden’s son.

Jankowicz, in a series of tweets, seemed to support the idea that the laptop story, originally published by the New York Post, was part of a Russian disinformation campaign.

“Back on the “laptop from hell,” apparently- Biden notes 50 former natsec officials and 5 former CIA heads that believe the laptop is a Russian influence op,” Jankowicz wrote in October 2020.

Jankowicz defended herself on Wednesday, saying that the tweet was part of her live-tweeting the final presidential debate.

In her announcement of the appointment, Jankowicz said “a HUGE focus of our work, and indeed, one of the key reasons the Board was established, is to maintain the Dept’s commitment to protecting free speech, privacy, civil rights, & civil liberties.”

The Disinformation Governance Board was announced by Department of Homeland Security head  Alejandro Mayorkas on Wednesday in testimony before the House Appropriations Subcommittee. It remains unclear what the Board would be doing or what their agenda is.

Regardless, critics have hopped into the replies of the original tweet, accusing the new Disinformation Governance head of spreading disinformation herself.

“So I guess the main qualification for this job is a history of spreading disinformation?” one user wrote.

While officials came out to decry the contents of Hunter Biden’s laptop when it was reported on in advance of the 2020 election, it’s widely been accepted as legitimate.

Another commentator pointed out a statement Jankowicz gave on CNN weeks before the 2020 election, warning about a “general concern about Trump supporters potentially showing up armed to the polls.”

Jankowicz also said earlier this week that she “shudders” to think what “free speech abolitionists” would do if Elon Musk loosens restrictions on Twitter.

Musk entered into a deal to buy the social media platform earlier this week for $44 billion and has vowed to crack down on anonymous trolls while also encouraging free speech on the platform.

While most any Biden appointee on a topic as fraught and loaded as disinformation would face instant criticism, the flagging of Jankowicz’s old tweets shows how a role like this might be doomed from the start.