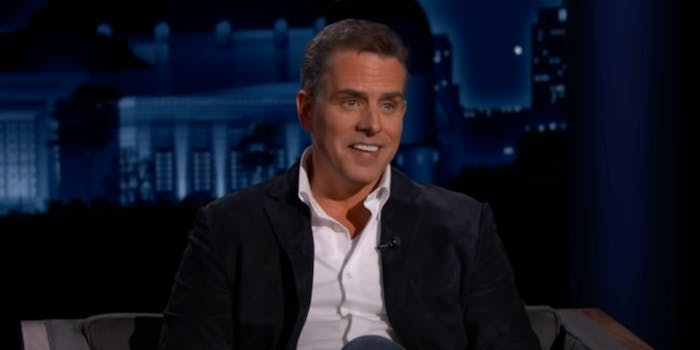 Conservatives are feeling victorious over a New York Times report that confirmed the existence of Hunter Biden’s laptop.

The contents of a laptop that belonged to President Joe Biden’s son was something of an obsession during the 2020 presidential campaign. At the time, conservatives—ranging from far-right conspiracy theorists to former President Donald Trump—called it the “laptop from hell.” Its contents included explicit videos of the younger Biden engaging in sexual acts, using drugs, and information about his business dealings.

Whether you believed it was real or not, or took issue with its contents or not, the laptop was an inarguably divisive issue during the 2020 election.

Facebook and Twitter temporarily censored a story about allegedly incriminating emails from the laptop, which sparked outrage among conservatives. Many also took issue with mainstream reporting at the time, which tended to treat the laptop’s purported contents with some caution in a way they believed wouldn’t have been afforded if it were the laptop of, say, the son of former President Donald Trump.

After reports of the laptop circulated, more than 50 former intelligence officials signed a letter saying that they suspected Russia had a hand in the matter. Though they were careful to note that they weren’t sure if the contents of the emails were authentic, some reports about the letter said that the intelligence officials described the emails as “Russian disinformation.” Disinformation is false, which the letter specifically didn’t take a position on.

On Wednesday, the Times published a detailed story about an ongoing federal investigation into Hunter Biden’s business dealings. The story centered largely on investigators’ efforts to determine whether he broke any laws, such as the Foreign Agents Registration Act (FARA), which requires disclosure of lobbying efforts on behalf of foreign clients.

Biden has not been charged with a crime. He’s previously insisted that his business dealings were all legal.

One sentence from the roughly 1,500-word story has captured conservatives’ attention. In a paragraph about emails between Biden and business associates involved in his foreign business dealings, the Times wrote, “Those emails were obtained by the New York Times from a cache of files that appears to have come from a laptop abandoned by Mr. Biden in a Delaware repair shop.” The Times noted that the emails had been “authenticated by people familiar with them and with the investigation.”

To many conservatives, that sentence is vindication. They believe Democrats and the media downplayed the laptop’s existence and contents to help President Biden win the election.

Charlie Kirk wrote on Telegram, “The same ‘journalists’ telling you the Bio-Lab Story is simply Russian Propaganda used the exact same playbook when it came to the Hunter Biden Laptop story…and look how that ended up.” Kirk was referring to claims that the United States operates bioweapons labs in Ukraine.

Similar reactions poured in from around the internet.

Others called out specific news outlets and highlighted their reticence to report on the laptop in the run-up to the 2020 election.

Hunter Biden has not commented on the Times’ report.