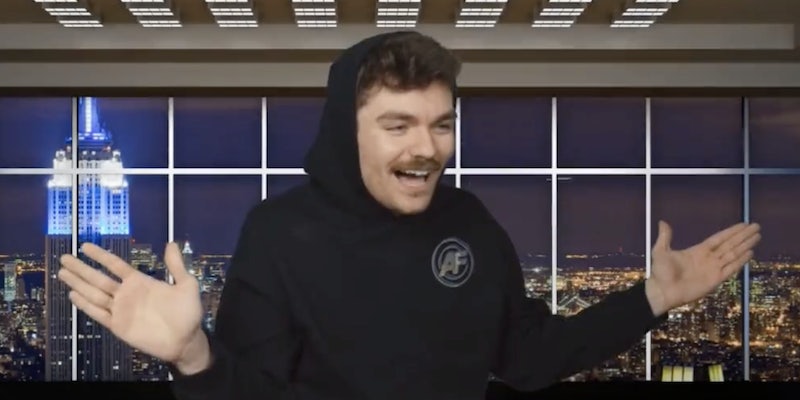 The white nationalist complained that his fans would also call Hitler a 'fakecel.'

Nick Fuentes has never had a girlfriend. He says he did kiss a girl once. He doesn’t want to do it again, though.

The white nationalist recently revealed his long-ago dalliance into the realm of romance, but said he doesn’t have interest in it anymore. His fans mocked him, calling him voluntarily celibate and a fake incel. In his defense, Fuentes compared himself to Hitler and insisted that he isn’t voluntarily celibate—because he didn’t choose to be born.

Being involuntarily celibate, or an incel, bonds many on the far-right. Online incel culture, where women shun men despite their desire, is often cited as one of the driving factors behind the rise of extremism. Thus, Fuentes being able to make out with a woman, meaning he has chosen to remain celibate instead of having it forced on him, would theoretically alienate Fuentes from his fans, who believe women don’t desire them despite their yearning for sex.

The clip from Fuentes’ show was unearthed by Right Wing Watch.

“I did it once. I made my point. I proved my point and now I’m good. Now I’m done,” Fuentes said of the kiss, which he said happened nine years ago when he was in high school.

His fans, who call themselves groypers, taunted him.

“Call me a fakecel all you want. I’m an incel, alright. I know I’m an incel,” Fuentes said, reading their comments.

Other commenters piled on, calling him the “fakest of the fake” and “wannabe incel.”

“I’ve never touched a woman in my life.”

“…I don’t even want that, so. I don’t want touch. I don’t want a relationship. You know what I want? Total Aryan victory. That’s what I want,” Fuentes continued. “…Hugs and kisses, touch? Sappy stuff? Please.”

Fuentes then introduced some pretzel logic.

“I was born involuntarily and it’s involuntary that I don’t want that, okay? So … I’m just like Hitler.”

Seemingly unaware of Hitler’s longtime mistress, Eva Braun, Fuentes bemoaned, “How dare you call me a fakecel. If Hitler were alive today, you would call him a fakecel. How dare you!”

“Hitler could’ve had any girl he wanted, but he said ‘I don’t have time for that.'”

“Not that Hitler’s my hero or anything, but you’d have called Hitler a fakecel.”

The mockery continued in comments on Right Wing Watch’s tweet.

“Impressing the boys by bragging about how no woman will ever love me,” added another.