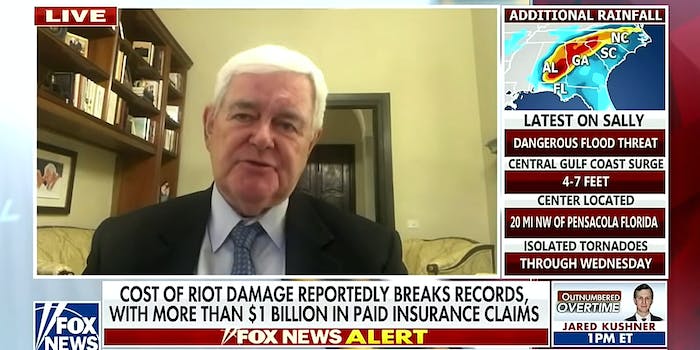 In perhaps the wildest twist of all of 2020, a leading Republican figurehead went on Fox News and wasn’t allowed to spin conspiratorial nonsense.

Adding his final thoughts to cities that have faced outbreaks of looting and violence this summer, Gingrich said that “the number one problem in all these cities is George Soros-elected, left-wing, anti-police, pro-criminal district attorneys who refuse to keep people locked up.”

Billionaire George Soros is a frequent boogeyman of both the right and the far-right. On the right, he has been accused of paying protesters at the Brett Kavanaugh confirmation hearings and funding immigrant caravans coming to America. On the far-right, he is demonized by adherents to the QAnon conspiracy.

“You cannot solve this problem” with progressive district attorneys, Gingrich said, who were “overwhelmingly elected with George Soros’ money. “

“I’m not sure we need to bring George Soros into this,” said host Melissa Francis off-screen

“He paid for it,” Gingrich whined, before being cut off by another panelist who said she didn’t think that needed to be part of the discussion.

“So it’s verboten,” Gingrich said, then sat there silently, having been thoroughly rebuked.

It must have been a jarring moment for him, because if Fox says your conspiratorial nonsense has gone too far… it’s definitely gone too far.