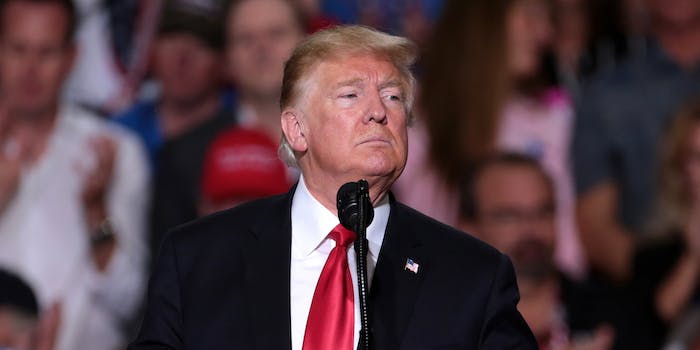 There is no evidence Soros is involved.

President Donald Trump said he “wouldn’t be surprised” if billionaire liberal donor George Soros was funding the migrant caravan traveling through Mexico toward the United States.

The president was asked about the caravan after ordering a large contingent of troops to be stationed along the border weeks before the group is expected to be close to the country. Speaking with reporters, the president didn’t deny the unsubstantiated claim that Soros, a regular target of right-wing attacks, is funding the group.

Trump was directly asked about whether he thought someone was funding them.

The president was then asked about Soros.

“I don’t know who, but I wouldn’t be surprised, a lot of people say yes,” Trump said.

REPORTER: Do think somebody is funding the caravan?

T: "I don't know who, but I wouldn't be surprised. A lot of people say yes." pic.twitter.com/U1w9EYHcw6

The idea that Soros is somehow connected financially to the caravan has picked up steam among corners of the internet, as the Washington Post points out. Rep. Matt Gaetz (R-Fla.) tweeted a video last week claiming that people were being paid to join the caravan. Above the video, Gaetz said people needed to “investigate the source” and wrote “Soros?” among other things.

There is no evidence that Soros paid anyone connected to the caravan.

Despite the lack of evidence, many Trump supporters continue to see Soros as a boogeyman.

CNN reporter Jim Acosta tweeted a video of a person dressed as Trump for Halloween at a rally on Wednesday night where he asked the reporter to investigate Soros.

Had a hell of a night in Fort Myers. One guy dressed as Trump was going off on Soros. pic.twitter.com/IMqdKQkY6r

“Why don’t you do some real investigation, you fucking self-hating liberal?” the man told Acosta. “Why don’t you look into George Soros shorting interest on the U.S. dollar? He’s trying to fucking prevent—he’s trying to change the world order.”