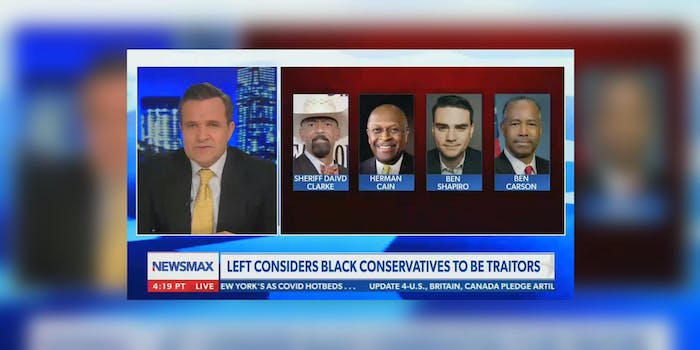 ‘One of those things is not like the other’: Far-right outlet roasted for putting Ben Shapiro on list of prominent Black conservatives

'One of these things is not like the other.'

On Tuesday, a far-right outlet ran a segment claiming liberals view Black conservatives as traitors. Now, Newsmax is being mocked for including photos of a dead man and a white Jewish man in its lineup of “Black conservatives.”

In a screenshot posted to Twitter, Newsmax anchor Greg Kelly stares grimly into the camera as the chyron below him reads, “Left considers Black conservatives to be traitors.” To his left, photos of four men who presumably fit the bill appear: former Sheriff David Clarke, Ben Carson, Herman Cain, and Ben Shapiro.

Jason Campbell of Media Matters for America tweeted a screenshot of the image Wednesday morning. “This is an actual screenshot from Newsmax. I did not edit this,” he wrote.

In the segment, according to Mediaite, Kelly acknowledges that Shapiro isn’t Black and that Cain is deceased, but that the two are heroes of the movement.

“They’re out there, but they’re shunned because, boy oh boy, what they have to say. And the late Herman Cain and, of course, Ben Shapiro, not Black but one of the heroes of the movement,” Kelly said.

Reactions to the bit about “Black conservatives” proves that at least Newsmax hasn’t lost its ability to amuse. Laughter rang from the timeline.

Many jokes focused on its inclusion of Shapiro in the lineup. Shapiro is Jewish and has tweeted that he’s of Russian and Lithuanian heritage.

“Ben Shapiro going to interview with NAACP soon,” joked one.

A few noted with obvious discomfort that many white supremacists don’t consider Jewish people to be white. “I know Nazis don’t think of even white Jews as white but um…” tweeted one.

Others took issue with Newsmax including Herman Cain in its list of Black conservatives. Not because of his race or politics—Cain was Black and Republican—but because Herman Cain is dead.

The fact that Newsmax couldn’t come up with more than two living Black conservatives struck many as hilarious.

“When you have so few prominent black conservatives you have to include a dead guy and Ben Shapiro to round out your list of four,” commented @RADArtDude.

Many simply took the episode as evidence of the quality of the reporting at the right-wing outlet.

“At least leftists can tell the difference between Black conservatives and BEN SHAPIRO,” quipped @DrKC4.