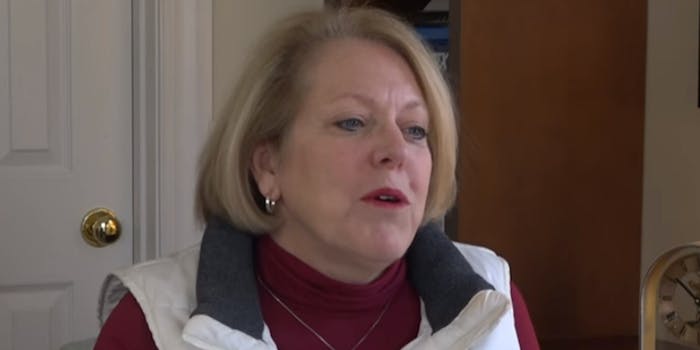 Clarence Thomas’ wife appears to be a QAnon believer

It raises some interesting questions.

Thursday night, the Washington Post reported on text messages it obtained from the wife of Supreme Court Justice Clarence Thomas, Ginni Thomas, which reveal that she texted President Donald Trump’s chief of staff and urged him to overturn the 2020 election.

They also seem to reveal that she, the spouse of one of the highest judges in the land, is Q-pilled.

QAnon, the conspiracy that a group of elites secretly run the world (and are pedophiles), spread across the country over the past several years, as more and more people glommed on. It is apparently now even convincing the elites who are close to people who run the world of its veracity as well.

The texts sent to Mark Meadows, Trump’s chief of staff, are a hodgepodge of the biggest conspiracies that were swirling in Q communities in the wake of the 2020 election going to President Joe Biden.

The first of the 29 messages between Ginni Thomas and Meadows was sent on Nov. 5, two days after the election. She sent him a link to a YouTube video labeled “TRUMP STING w CIA Director Steve Pieczenik, The Biggest Election Story in History, QFS-BLOCKCHAIN.”

QFS stands for Quantum Financial Scam (QAnon believes often have complex theories about monetary policy), but more interesting is the name Steve Pieczenik, a person who some have speculated might be one of the original driving forces behind QAnon. In the run-up to the 2016 election, Pieczenik was pumping out QAnon-esque videos about the Clintons on YouTube, with language that mirrored what became the conspiracy.

More interesting, and directly tied to Q, was Thomas’ texts about Guantanamo Bay.

In the Nov. 5 message to Meadows, Thomas went on to quote a passage that had circulated on right-wing websites: “Biden crime family & ballot fraud co-conspirators (elected officials, bureaucrats, social media censorship mongers, fake stream media reporters, etc) are being arrested & detained for ballot fraud right now & over coming days, & will be living in barges off GITMO to face military tribunals for sedition.”

Enemies being sent to Guantanamo Bay (GITMO) and facing military tribunals is a hallmark of the QAnon conspiracy, which long speculated that numerous various Democrats were sent there for tribunals and summary executions, having been replaced by clones.

The texts to Meadows also reference watermarks on ballots, another theory pushed by QAnon in the wake of the election, as noted by the Daily Beast’s Will Sommer.

Thomas has long said that she and her husband Clarence do not talk politics, especially as more and more is revealed about her dalliances with the far-right.

But QAnon has a way of seeping out, negatively affecting families, even if only one person believes. It’s possible Thomas never once mentioned to her husband that she maybe thinks Hillary Clinton ate a baby, but it raises a fascinating question.

Thomas is the wife of one of the most powerful men in America. If even she, in the upper echelon of society, believes the elites are out to get her, is anyone safe from QAnon’s lure?