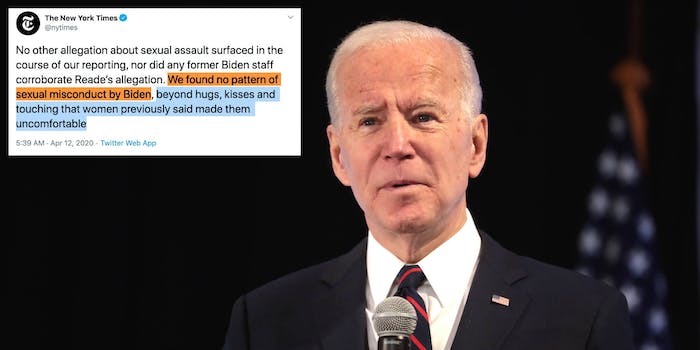 Its initial comments drew confusion, but the edit may be worse.

The article in question investigated the allegations made by Tara Reade, a former aide to Biden back when he was a senator, claiming that the former vice president sexually assaulted her in 1993. While the article ultimately goes into detail about Reade’s complaint, it first makes a point to note that her accusation, as of now, is the only one specifically claiming sexual assault.

“No other allegation about sexual assault surfaced in the course of reporting, nor did any former Biden staff members corroborate any details of Ms. Reade’s allegation. The Times found no pattern of sexual misconduct by Mr. Biden.”

However, a previous version of the article had an addendum to that sentence—“beyond the hugs, kisses and touching that women previously said made them uncomfortable.”

The Times removed that line from the article and failed to note that an edit was made after publication.

The original passage drew confusion, as many consider the accusations of inappropriate and unwelcome touching that eight women (including Reade) made against Biden last year to constitute a pattern of sexual misconduct.

It appears the Times is using that contradiction as a reason for editing the piece, as well as deleting the accompanying tweet that quoted it, citing “imprecise language.”

However, some folks insist that deleting the note of the prior accusations rather than deleting the claim that there is no pattern of misconduct fails to correct “imprecise language,” but rather only serves a pre-determined narrative framing: that there’s nothing to see here.

The stealth editing of the article itself, the deletion of the tweet, and the overall framing of the investigation have all resulted in criticism and frustration from readers across the political spectrum.

Biden is currently the frontrunner to become the Democratic nominee up against President Donald Trump in the 2020 election. He has not personally responded to Reade’s latest allegations, though, as the New York Times points out early on, a spokesperson for his campaign has unequivocally denied them.