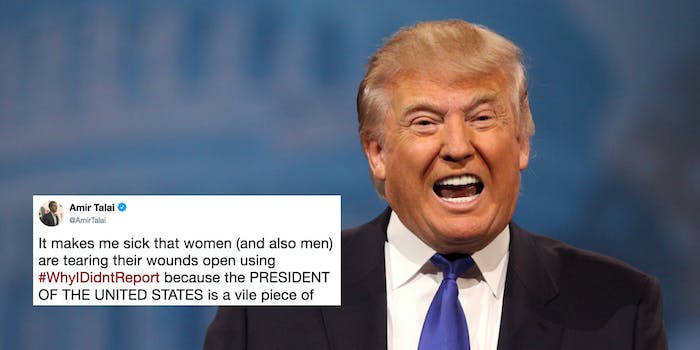 For how much longer do we have to shout our traumas?

Sometimes, writing and “publishing” a tweet feels no different than screaming into an empty, all-encompassing void of darkness and despair. This feels especially true when writing such tweets is like picking at a scab, or re-opening a wound. And this feels particularly true when such tweets are aimed at a man with a great amount of power who has been accused of sexual harassment and assault by 19 women and has privately admitted to having the ability to “grab [women] by the [vagina].”

And yet, despite the effort and trauma and prior socialization that has told us yelling into this void will do us no good, sexual assault survivors across Twitter have found themselves, once again, gutturally decrying President Donald Trump‘s latest tweets on sexual assault, defending themselves and thousands of others who didn’t report their sexual assault after they occurred.

Ford says Kavanaugh assaulted her as he attempted to remove her clothes to rape her when the two attended a party in high school, when she was 15 and he was 17. She also wants the FBI to investigate her claim before she testifies against Kavanaugh as part of his nomination proceedings. However, if “the attack on Dr. Ford was as bad as she says, charges would have been immediately filed” with law enforcement, either by Ford or her “loving parents,” according to Trump.

“I ask that she bring those filings forward so that we can learn date, time, and place!” his tweet concluded. A second tweet from Trump asked why someone didn’t “call the FBI” at the time of the assault, instead of making the FBI investigate now.

There are countless things wrong with Trump’s assertion that had an assault been “as bad,” a report would have been filed. Not only does Trump completely skate the idea that Kavanaugh may not have assaulted Ford—he asserts that even if he did, it might not have been that “bad,” or at least not “bad” enough to file a report with law enforcement, as if even a gentle attempted rape wouldn’t disqualify Kavanaugh from serving on the Supreme Court. Secondly, the chances that law enforcement would have done a thing if Ford had reported Kavanaugh’s attempted rape at the time are laughable.

But thirdly, and most importantly, there are near-infinite reasons for why someone in Ford’s position might not have told her “loving parents” about the assault, let alone would have reported the assault to the authorities. Those reasons range from the aforementioned problem that law enforcement may not have done a thing about Kavanaugh’s behavior at the time of the assault, to the various stigmas that come with being a survivor of sexual assault, even today—that you must’ve been foolish with your personal safety, that you’re weak to have been assaulted, or that you must’ve done something to deserve it.

Across Twitter, survivors themselves have taken on the hashtag #WhyIDidntReport to share their own assaults, and divulge why they themselves didn’t say anything at the time they were assaulted.

#WhyIDidntReport. The first time it happened, I was 7. I told the first adults I came upon. They said “Oh, he’s a nice old man, that’s not what he meant.” So when I was raped at 15, I only told my diary. When an adult read it, she accused me of having sex with an adult man.

I was living in a time when someone who identified as a gay teenager would NOT be taken seriously by the police.

I believed that I would be mocked & ridiculed for being gay.

I also felt it was MY fault.

I didn't think they would believe me.

It makes me sick that women (and also men) are tearing their wounds open using #WhyIDidntReport because the PRESIDENT OF THE UNITED STATES is a vile piece of shit.

Hundreds of men and women have shared their reasons for not reporting their assault, touching on their fears of not being believed, or being shamed, or even troubles in coming to grips with the idea that an assault even happened. This experience of being able to talk about this trauma openly, in a supportive environment with dozens of community responses of love and empathy, can feel cathartic. For survivors, this can be helpful regardless of how their stories impact and educate others.

But above all, #WhyIDidntReport serves as a reminder that once again, survivors must bear the scars of their assaults, and reopen their wounds as a means to educate people, such as Trump. Worse yet, survivors are having to take on the brunt of the stress in retelling their experiences to educate people who have no interest in learning.

Ah, #WhyIDidntReport. Another hashtag that puts the onus on victims to trot out their trauma in the hopes THEIR story is deemed worthy of empathy to a demographic wholly incapable of feeling empathy. I love online!

It makes me sick that women (and also men) are tearing their wounds open using #WhyIDidntReport because the PRESIDENT OF THE UNITED STATES is a vile piece of shit.

Reminder: Every single person posting #WhyIDidntReport is reliving their trauma to try and teach folks to extend long overdue empathy and protection. The folks posting are only a drop in the bucket – so many people aren't (and may never be) ready to relive that trauma.

Of course, educating others this isn’t the only end of the means—the catharsis! the community!—but it’s a significant end nonetheless. Ultimately, people in power, such as the president and the countless Congress members who doubt the validity of Ford’s account, have once again put the onus of validating sexual assault on the survivors themselves.

And once again, survivors are having to rehash their traumas as proof for people who refuse to believe them.