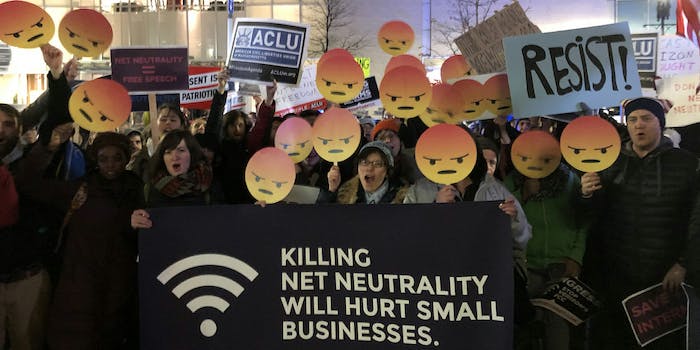 The Federal Communications Commission‘s (FCC) decision to end net neutrality rules will officially go into effect on June 11. But internet rights activists say the fight to save net neutrality is far from over.

The commission’s order to “restore internet freedom,” aka dismantling of net neutrality rules that ensured all internet traffic is treated equally, will go into effect as the culmination of the agency’s much-protested vote late last year.

However, activists say there is still hope—and work to be done—despite the June 11 day of reckoning. The push, they say, will involve urging lawmakers to vote in the House of Representatives for a Congressional Review Act (CRA) resolution that would overturn the FCC’s decision, just like their Senate counterparts did last month.

“People are going to be pissed off. Really pissed off. And rightly so. It’s hard to imagine a more clear example of how our democracy is broken,” Evan Greer, the deputy director of internet rights advocacy group Fight for the Future, said in a statement. “We’re going to harness the power of the internet to ensure that people have a way to channel that anger productively. Any lawmaker, of any party, that fails to sign the discharge petition in support of the CRA will regret it come election time.”

Fight for the Future, which is part of a coalition of groups called Battle for the Net, said it’s asking net neutrality supporters to begin harnessing “whatever corner of the internet that you control” to push for support for the House CRA.

The group has posted avatars that internet users can use for various social media accounts and created widgets for websites that direct visitors to contact their representatives in Congress to demand support for the CRA.

Last month, the Senate voted 52 to 47 to advance the CRA motion, pushing the fight to save net neutrality to the House. A similar CRA would need 218 votes to pass in the House. So far, 170 members have voiced their support for it, according to a scorecard of legislators compiled by Battle for the Net.

If successful in the House, President Donald Trump would need to sign the motion into law.

While internet service providers (ISPs) will have free reign to slow down, speed up, or block internet content at their will starting next week, the American Civil Liberties Union (ACLU) warns that average internet users won’t see big changes immediately.

“Their wisest course of action will be to eliminate net neutrality like a slow drip over time in the hope that consumers won’t notice and will stop caring,” wrote Chad Marlow, an advocacy and policy counsel at the ACLU. “So yes, net neutrality will be gone on June 11. When we will first feel the impact of that loss is unknown, but what is known is that the fight is far from over.”