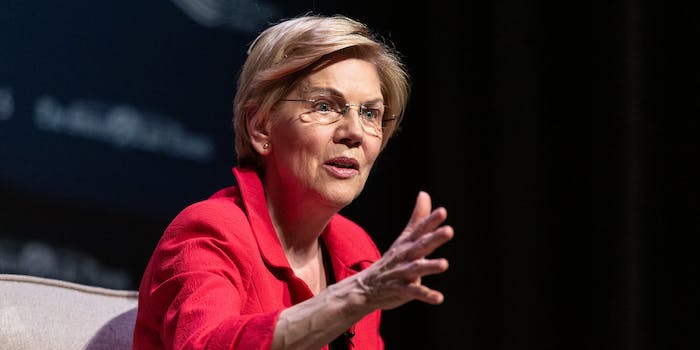 Warren has been vocal about her support for net neutrality for years.

Sen. Elizabeth Warren (D-Mass.), a 2020 Democratic presidential hopeful, announced on Wednesday that she would appoint commissioners to the Federal Communications Commission (FCC) who would restore net neutrality rules if elected president.

The announcement came as part of a plan to invest $85 billion to expand broadband access in the United States and the creation of a federal office to distribute the money in the form of grants. Under the plan, the grants would be used to build fiber networks in underserved areas of the country.

Warren, who has long been a proponent of net neutrality, said she would appoint FCC commissioners who would restore the provisions if elected president.

She also specifically mentioned that the commissioners would be expected to regulate internet service providers as “common carriers,” or under Title II of the Communications Act, a designation that has been a sticking point among lawmakers for net neutrality bills in Congress.

“I will appoint FCC Commissioners who will restore net neutrality, regulating internet service providers as ‘common carriers’ and maintaining open access to the Internet,” Warren wrote in a blog post on Medium outlining her plan.

Should Warren be elected president, she would be able to nominate FCC commissioners who would then need to be confirmed by the Senate. She’d also be able to select a commissioner to serve as the agency’s chairman. Only three of the five commissioners can be from the same political party. They serve five-year terms.

Warren has been a vocal advocate for net neutrality for years. Ahead of the FCC’s vote enshrining net neutrality, Warren said the 2015 Open Internet Order was “welcome news for all of us who have stood up for a free & open internet.”

The Massachusetts senator also delivered a speech on the Senate floor urging support for her colleagues to sign onto the Congressional Review Act (CRA) effort to overturn the FCC’s repeal last year. That effort passed the Senate but died in the then-Republican controlled House.

This year, the Democrat-controlled House passed the Save the Internet Act, but it stalled in the Senate.