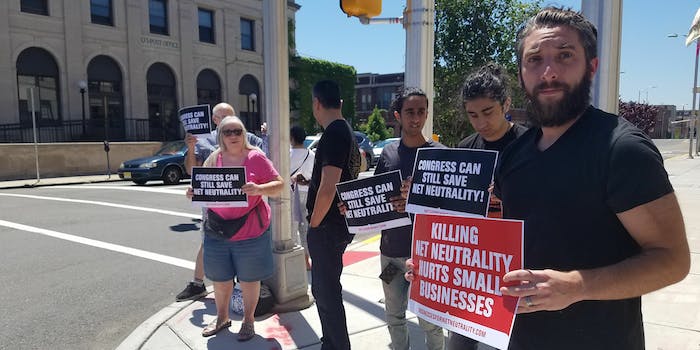 The deadline for securing votes has been extended.

A congressional effort to overturn the Federal Communications Commission‘s (FCC) decision to rescind net neutrality rules still has a shot—at least for a little while longer.

The deadline for the House of Representatives to get the needed number of lawmakers to sign onto its Congressional Review Act (CRA), headed by Rep. Mike Doyle (D-Penn.), was originally Monday. However, Congress will stay in session until later this month as President Donald Trump and lawmakers try and avert a possible government shutdown, giving net neutrality advocates and lawmakers more time to try and secure votes.

Other lawmakers, like Rep. Mary Gay Scanlon (D-Penn.) have voiced support for net neutrality recently, but have yet to sign onto the discharge petition.

Currently, 180 lawmakers have signed the discharge petition, making it 38 signatures shy of the 218 needed to force a floor vote.

The Senate passed its version of the CRA earlier this year. If successful in the House, it still would need to tackle one final hurdle: Trump would need to sign it into law.

“We’re going to have our work cut out for us in 2019. But right now momentum is on our side, and we’ve just gained a crucial additional two weeks to convince Congress to vote to overrule the FCC,” internet rights advocacy group Fight for the Future, wrote in a statement. “With your help, we can rally the entire Internet on Friday, December 14, the one-year anniversary of Ajit Pai’s disastrous repeal. And, with any luck, we can pressure a handful of remaining Democrats who haven’t signed on to the CRA to add their names before the end of the year.”

A representative for Doyle did not immediately respond to a request for comment from the Daily Dot.